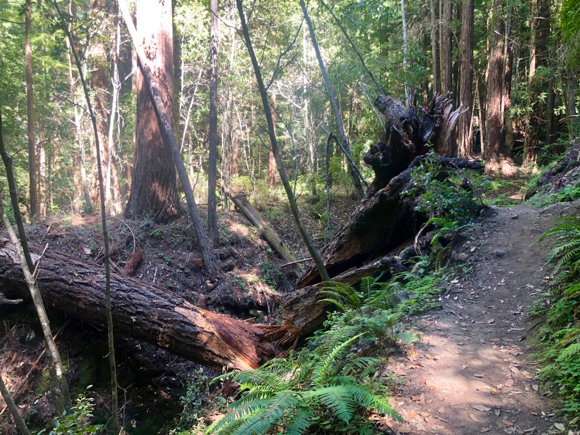 In one respect, Sam McDonald County Park is empty. On a Sunday afternoon, on a five-mile loop, I ran into a total of zero people. In the place of people is some of the most impressive old-growth redwood forest on the western side of the Santa Cruz mountains, as well as a silence most conducive to the enjoyment of such an awe-inspiring sight. A truly underrated park, whose sanctity alone warrants the 40 minute drive.

Much of the unsullied nature of the park can be attributed to its origins. Most of the 850-acre park was first owned by Stanford groundskeeper and the park’s namesake, Emmanuel McDonald. McDonald was obsessed with the dense redwood forest that the tract of land boasted, once writing, “I have built a humble retreat, my lodge… ‘neath the lords of the Chicsaw forest (the redwoods), and this nature’s sanctuary brings me to peace and rest and reflection.”

Thus, when McDonald left the land to Stanford in 1957, it was entirely undeveloped, except for McDonald’s lodge. The land was bought by San Mateo County in 1958 and designated for public use in 1970.

Walking through the park, it is quickly apparent why McDonald held the land in such reverence. The density and accompanying biodiversity of the old growth forest is unbelievable. The forest floor is absolutely covered by shrubbery, growing up from the nutrient-rich decay of trees past; a combination of Douglas Firs and Coastal Redwoods grow so densely that only the occasional beam of direct sunlight reaches the ground.

The primary loop, the five-miler that I took, begins on the Heritage Grove Trail from the eastern edge of the parking lot. This takes up a large part of the hike, and is where the earlier-described density of life is most evident. One of the characteristics of these old-growth forests is an incredible capacity for moisture retention. Once water enters the ecosystem, it cycles repeatedly, trapped, through the forest. What results is an incredibly lush undergrowth, with ferns, mosses, and other plants which require a moist environment. 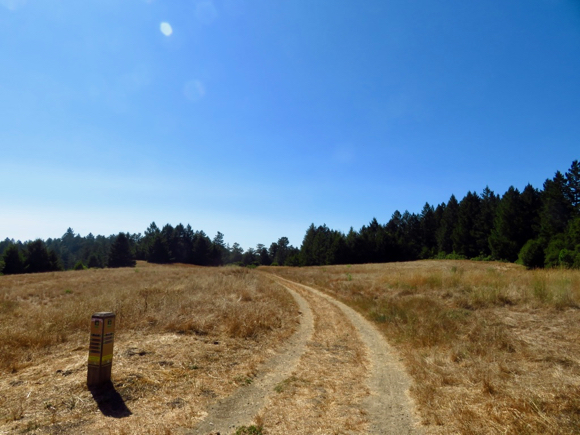 Eventually, the trail begins to gain some height, exiting the near-tropical woodland, transitioning to something almost entirely different. The route emerges onto an exposed hilltop; here, instead of the lush greenery of before, the underbrush is composed primarily of oatgrasses and bunch grasses, as dry as they are characteristic of Northern California. At this point, to continue on the loop, you should be taking a right onto Towne Fire Road. For the majority of the rest of the hike, the trail follows rolling hills, with sparse tree coverage.

One of the most exciting opportunities offered by Sam McDonald is actual through-hiking. The park is one of three, directly adjacent to each other, with connected trails. Pescadero Creek Park, the largest of the three, boasts two backcountry campsites, meaning that one could pack in through Sam McDonald, and camp in Pescadero Creek. The campsites do require reservations, and are fully primitive (no running water, but no glampers!).

These old-growth forests – forests that have grown undisturbed by natural or manmade forces for extended periods of time, reaching a steady state of organism growth and death – are few and far between. 96 percent of such coastal old-growth forests have been lost to logging. All the more reason to visit Sam McDonald now, right?

There is a $6.00 entry fee, which is waived for veterans, seniors (Mon.-Fri.) and people with disabilities.  Also, Apple maps directs you to a spot a bit earlier than the trailhead, so venture on (for a half-ish mile), and it should be on your right.

To learn more about the park, visit its website.

Nat Gerhard is a junior at M-A, and this is his first year with the M-A Chronicle, where this article first appeared.  He enjoys writing about hiking and nature, along with social and political issues, on and off campus. He also photographs for the Chronicle.