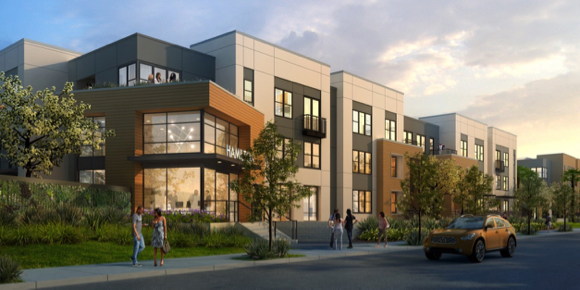 Facebook is contributing $25 million to build new housing for teachers and other public service workers as part of a partnership established with Santa Clara County Supervisor Joe Simitian and several local school districts in Santa Clara and San Mateo counties, the company announced today. The 90- to 120-unit community will be built on 1.5 acres of Santa Clara County-owned land at 231 Grant Avenue in Palo Alto.

The new development is within walking distance of Caltrain and will house families currently living in the 22-apartment Menlo Park pilot program created by Facebook in 2017 at 777 Hamilton Ave. near the company’s global headquarters (pictured top), in addition to dozens of new families accommodated by the project.

“This is an exceptional gift by Facebook. It helps our teachers. It helps our schools. And it helps our communities. From the beginning, Facebook ‘got it’ — the importance of affordable teacher housing in the communities where teachers teach,” said Simitian.

School employees, particularly those in the early and middle parts of their careers, are part of what is sometimes referred to as the “missing middle” — they don’t qualify for traditional affordable housing, but they can’t afford market-rate housing prices that are geared towards significantly higher-incomes.

Due to the high cost of living, local school districts continuously face challenges hiring teachers, as well as teacher retention issues. It is often too expensive for teachers to live in or near the districts where they teach; and teachers sometimes leave their school districts midway through their careers in order to move to lower-cost areas.

Simitian noted that, “No one wins when local teachers have to commute from miles and miles away. It’s hard to attract and retain the best teachers available. Time in the car is time not spent with students or preparing lesson plans. And our teachers become more and more remote from the communities where they teach.

“This was already a challenge years ago when I was on the Palo Alto School Board, and it’s only gotten worse with every passing year. I don’t think we have to accept this as inevitable. With a little creativity and collaboration, we can make progress.”