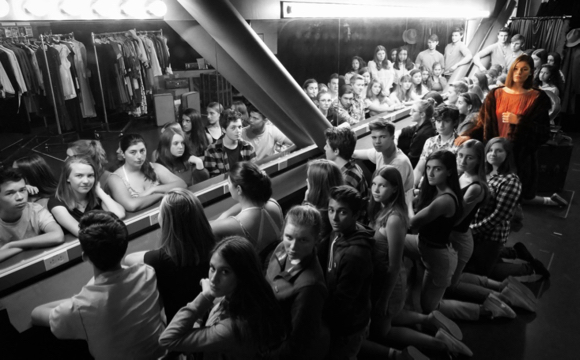 The year is 1930 and struggling novelist Cliff Bradshaw falls for Sally Bowles, a self-indulgent cabaret singer in the seedy Berlin Kit Kat Club. Simultaneously, the widowed landlord Fraulein Schneider acquiesces to love and romance with her Jewish tenant Herr Schultz. But despite the Kit Kat Club emcee’s constant refrain to “leave your trouble’s outside . . . life is beautiful,” there is no reprieve from the looming events to come.

With a boy-meets-girl story of romance at its core, a dose of the decadent, and plenty to ponder, the award-winning and oft-revived musical continues to dazzle with its timeless iconic score, bawdy fun, and reminder of the dangers of political apathy. Senior Emma Dressel, who plays the chanteuse Sally Bowles explains, “As young people today, we all know how easy it is for people to fall victim to ignorance . . . staying knowledgeable about the present day societal and political issues as well as understanding the tragic parts of history helps us approach this complex emotional show.”

Director of Creative Arts and Upper School Drama Steven Minning is thrilled to be directing his eighteenth mainstage show for Menlo School. This season will mark the end of an era as it will be the final season of shows performed in Menlo College’s Florence Moore Auditorium. Menlo School’s state of the art theater — the Spieker Center for the Performing Arts — is currently under construction and scheduled to open for the start of the 2020-21 school year.

“One of the most intriguing things about directing Cabaret is how the show requires the space (the theatre) to become a cabaret, with a whole world happening simultaneously outside,” says Minning. Florence Moore Auditorium, a small theatre that has created challenges for past productions, offers the perfect setting, “a smaller space in which the show flourishes best, where it’s easier to break down the fourth wall and make the audience feel part of the cabaret itself, enmeshed with the cast and story.”

Continuing the tradition of philanthropy Minning began seven years ago through Menlo Drama Gives Back, this production of Cabaret will benefit The Sentry, a nonprofit organization comprised of financial investigators, international human rights lawyers and regional experts that works to end financial profiting from war crimes and genocides, such as the most recent in South Sudan. Over the past six seasons, Menlo Drama has raised more than $40,000 for the benefit of nonprofit organizations, chosen by the casts of each production because their work resonates with the themes of the show. The Cabaret cast chose The Sentry for its mission to destroy the political and economic incentive structure that motivates and sustains our world’s most horrific human atrocities.

Tickets are $10 for adults, $5 for students, available for advance purchase online and at the box office one hour before each performance. This show is recommended for middle school audiences and up.