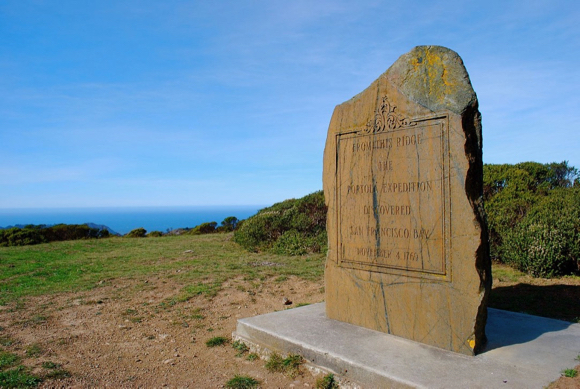 Note: Menlo Park Historical Association is hosting an Ohlone-Portolá event at the southeast end of Alma St. in Menlo Park where it intersects with East Creek Dr., on Saturday November 9, from 11:00 am to Noon. The event will be held in front of California Landmark #2. Here is MPHA member Bo Crane’s account of how that landmark came to be:

State Historical Landmark No. 2 at the south end of Alma Street in Menlo Park states that an expeditionary force of 63 men and 200 horses and mules camped near the spot in 1769. Gaspar de Portolá, an officer in the King of Spain’s army, recently appointed Governor of Alta California, had been sent to locate a huge bay that had been described in 1602. The bay had been named the Port of Monterey, in honor of New Spain’s viceroy, or king’s representative, who was from Monterrei, Spain.

Traveling along the California coast, Portolá and his band passed by Monterey Bay but didn’t recognize it from the overblown description. They continued until reaching the steep hills around Pacifica. At that point, the group ascended what is now Sweeney Ridge and on November 4 spotted the large bay below.

The population of local peoples is estimated at about 1,400 in population on both the ocean and bay sides of the Peninsula. For them, these intruders were foreign in their skin color, language, dress, and demeanor. Why were they here?

From the Pacifica ridge, the Portolá band traveled south along the edge of the Crystal Springs Valley before following San Francisquito Creek eastward. On the morning of November 6, the band was met by about 40 native men with bows and arrows filing out of the hills. The natives presented two large baskets of gruel. The Spaniards ate but resisted the natives’ insistence to visit their villages. 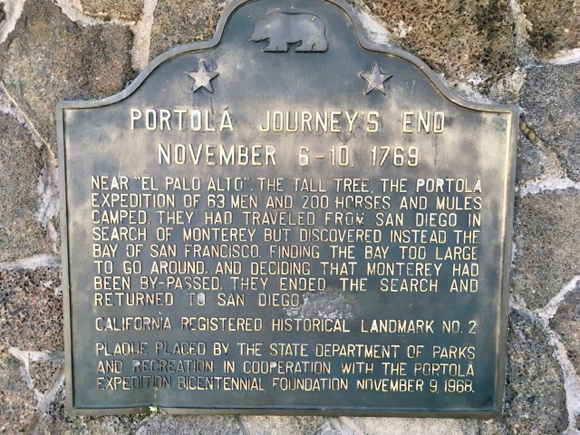 The Portolá group continued eastward over the low lying hills to a large plain containing white-oaks and live-oaks, observing smoke emanating for several villages in different directions. Here they made camp by the creek at the site of State Historical Monument #2, located at the south end of Alma Street in Menlo Park. It wasn’t really the “Journey’s End,” as Landmark No. 2 indicates, but rather the turn-around spot as the expedition soon retraced its route to Pacifica and then south to San Diego.

Over the next few days at the creek, Father Juan Crespí, one of two priests within the party, noted in his diary, that they were visited by (translated): “great numbers of heathens, the finest and best-mannered that have been met in the whole journey.” Most of the men were “well-bearded.” The Portolá group avoided the local villages and so gave no mention of native women and families in the area.

So, we have just the briefest descriptions of the native men who lived in the environs of what is now Menlo Park. The Spanish word translated as “heathens” is “gentiles,” meaning non-Christian. They were vulnerable to the zeal of the Franciscan missionaries reinforced by the Presidio soldiers.

When Mexico took over from Spain in the 1820s, the national government ended the mission system but it was too late for the native peoples, almost completely wiped out by disease and the establishment of ranchos occupying their former habitat. No tribal names are listed by the diarists.

The natives were collectively called “Costeños, ” meaning people of the coast, including the Peninsula. The name has since been Anglicized from Spanish to “Costanoans,” a foreign name for the local peoples. A tribe in the San Gregorio coastal area was the Oljone or Olchone. An 1871 book applied the name “Ohlone” to all natives in the region.

The misapplied name has now been modified to the Raymatush, whose descendants are still present in the area. Because the name “Ohlone” has become so widely used, the native people are known as the Raymatush Ohlone, covering all Peninsula tribes.

Portolá himself was a career military soldier, born to nobility in Catalonia, Spain. Having twice missed indentifying Monterey Bay in 1769, the following April he once again set off north along the coast with a smaller expedition and successfully identified Monterey Bay. He put his captain in charge and embarked by ship, never to return to California.

Instead, Portolá eventually went back to Spain where he was appointed King’s Lieutenant and died at age 63. He was only in California for a year and a half. Yet his name remains used for California towns, including nearby Portola Valley, two high schools plus several other schools and a State Park. His expedition of the Bay Area set in motion over 250 years a procession of events leading to what we know as today’s Menlo Park.