Owen Laine keeps up the Bonora tradition of winemaking 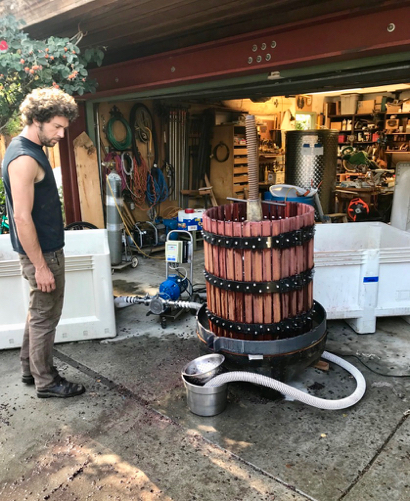 Owen Laine, shown making wine at his parents’ Menlo Park home, is a fourth generation wine maker on his mother’s [Beth Bonora] side of the family.

Enrico Bonora and his wife, Mari, left their ancestral town, Cologna, which is just outside Riva del Gard in Trento, Italy, around 1900, fleeing poverty. Their village was at the edge of starvation at the time, according to family lore.

The passed through Ellis Island and made their way to Pennsylvania, where Enrico became a coal miner. Their first child was born there, Americo Bonora, Beth’s father. His name became Merco eventually.

The family moved to Cumberland on Vancouver Island at some point, another coal mining town. One of the cousins travelled south to San Francisco and found work in a factory south of Market St. and got the rest of the family to follow.

The Bonoras eventually bought the business, which was primarily a small shop processing sheep and other animal gut, for the myriad of uses it was applied to at the time, such as musical instrument strings, sutures, and condoms.

When Enrico and Mari became established, he brought the tradition of wine making over from his relatives back home. He accumulated all of the necessary equipment for home winemaking, often by making the pieces himself. For example, he made his own press, including the hydraulic jack used to apply pressure to the must in the press.

“When Enrico died, none of his children kept up the tradition,” said Owen’s father Mike. “All of his equipment collected dust. But Beth scooped up all of the wine equipment, and for many years, she and I carted it along with every move we made. But we never got it together to learn how to use it.

“And then along came Owen. He interned for two years at Testarosa in Cupertino and then did two years in Argentina in Mendoza making Malbec. After that, he did a short stint in Baja California, home to the oldest vineyards and wineries in North America.

“In 2008, when Owen was working in Cupertino, he reinvigorated the Bonora home winemaking tradition. Our first vintage was Syrah from the Santa Cruz mountains, and since then we have made wine every year, using a variety of grapes from a variety of vineyards.

“The press you see in the photo is the same press his great grandfather used, rebuilt in 2008. All of our lab equipment is from the great grandfather. We have upgraded much of the production, but as much as possible, we still use Enrico’s whenever we can.”

“We believe that Owen is the only one of all of the descendants here in the U.S. who has picked up family winemaking. We started malolactic fermentation a few weeks back on our Pinot Noir, from the Santa Cruz mountains.”