Local teens star in “Hell on Earth: A New Musical (About Middle School)” 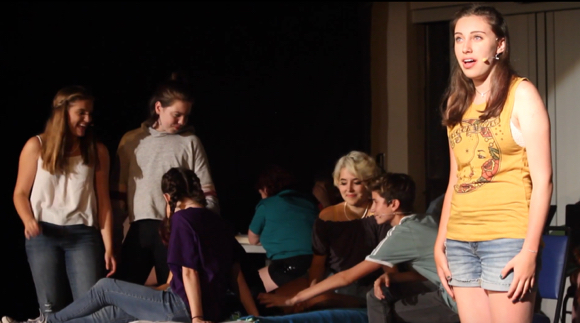 Three local teens are starring in the Young Actors’ Theatre Camp’s regional debut of Hell on Earth: A New Musical (About Middle School), playing five shows at the Mountain View Center for the Performing Arts November 15-17.

Menlo Park resident Samantha Belding plays the role of Caroline Whithers. Caroline and her six best friends join forces to survive the last four days of middle school in this new musical about the most difficult time in our lives — puberty.

This world premiere of Hell on Earth: A New Musical (About Middle School) is produced by The Young Actors’ Theatre Camp Founding Directors, Shawn Ryan and John Ainsworth, with book and lyrics by Shawn Ryan (America’s Got Talent) and music by Michael Sobie (Conductor of 2019 Game of Thrones Live Concert Experience).

“When we started out to write Hell on Earth: A New Musical (About Middle School), we wanted to make sure that we had a concept and a show that would come from the perspective of today’s teenager,” said Shawn. “CampYATC has given us all an amazing opportunity to understand the real issues facing our students today and write directly to their points of view. Not only are you seeing a show about teens, but the actors can relate to these scenarios in their daily lives.”

“Being a part of this original musical has been an incredible experience. The actors are treated like professionals and we have been given a true glimpse into show business,” said Samantha. “The transition to high school is not an easy one, and Hell on Earth combines hilarious lines with touching moments to create a beautiful and personal show to which everyone can relate.”

The Young Actors’ Theatre Camp is celebrating 18 years of inspiring and educating young performers to “Discover and Develop the Artist Within.” Consistently voted year after year as the Bay Area’s “Best Overnight Camp” by Bay Area Parent & Parents’ Press Magazines and readers, YATC has won multiple awards and was the inaugural inductee into Bay Area Parent Magazine’s “Hall of Fame.”

“The Young Actors’ Theatre Camp has created an extremely compassionate environment where you can express yourself without fear, all within a supportive peer group,” said Colleen, who has been a part of CampYATC for seven years. “Hell on Earth is a very real story — and completely relatable in the sense that it addresses different adolescent experiences about middle school with an overall theme of ‘figuring yourself out.’”

“This is my first experience with CampYATC, and when I heard they were holding auditions for this production, I knew I had to be a part of it. Many of my friends have enjoyed attending YATC camps and master classes over the years, and I absolutely love the direction Shawn and Michael have taken this musical. It really is a unique opportunity to be a part of an original production,” said Ian Cardamone.

The musical is appropriate for ages 8 and up due to language and themes. Ticket prices are $28-38 depending on location. Please note that the City of Mountain View adds a $3 per ticket facility use fee to all orders. The city assesses additional fees depending on method of purchase. Tickets are available by calling CampYATC at (925) 858-3548. For more information about the Young Actors’ Theatre Camp visit CampYATC.com.