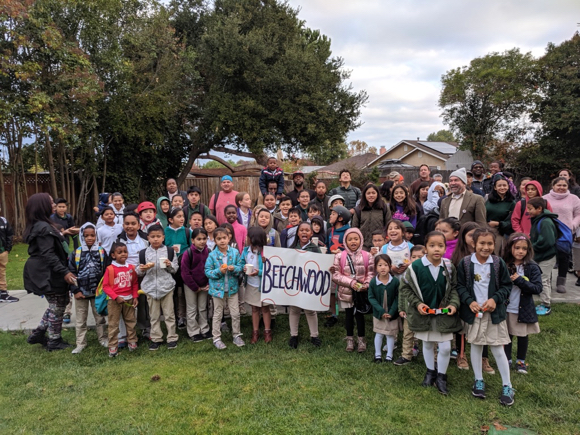 Yesterday, local school kids participated in Ruby Bridges Walk to School Day. The event celebrates both the stand against segregation (Ruby Bridges integrated an all-white school in Lousiana in 1960) and walking to school.

This is something that was started by the San Mateo County Office of Education (SMCOE) Safe Routes to School Program in South San Francisco a year or two ago. This year Menlo Park Mayor Pro Tem Cecilia Taylor and I have worked to bring the event to Menlo Park.

Tons of kids came from Beechwood School — and a few came from Belle Haven Elementary — and the energy and joy was palpable.

Safe Kids from Lucille Packard worked with Kathleen Daly from Cafe Zoe to bring treats, and they also provided cool reflective slap bracelets so kids can be seen when they are walking.

The San Mateo County office of Education Safe Routes Program designed the flyers and gave out cute buttons with Ruby Bridge’s picture (from 1960).

The Menlo Park Police Department came to escort the kids, blocking of streets with their motorcycles and passing out stickers. Special thanks to Community Service Officer Victoria Trask.

Dozens of community members and volunteers came to cheer on the kids.

As I was pinning a button on one little boy I asked him if he knew who Ruby Bridges is. He said, “Yes, we read a book about her at school.”

Beechwood did an amazing job preparing the kids for the event so it was as meaningful as possible. We are so proud to have brought more awareness about this American hero to the community.

This was the first year…can’t wait for next!