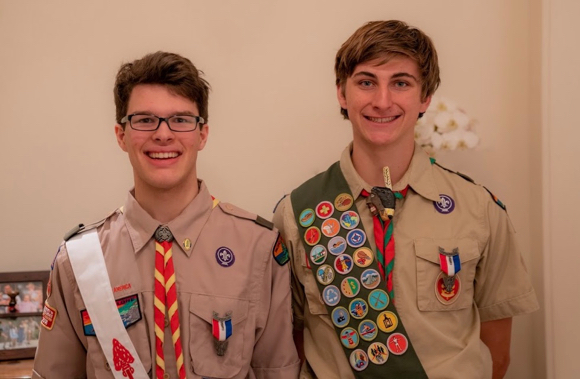 Two local scouts — Kevin Box (above right) and Hazen Stribling (left) — received their Eagle award from Troop 206 at a Court of Honor held January 12, 2020 at Trinity Church in Menlo Park.

Troop 206, first chartered by Trinity Episcopal Church in Menlo Park in 1958, has advanced 187 scouts to Eagle rank in the past 55 years. Its membership currently includes 44 active scouts from Atherton, Menlo Park, Woodside and Redwood City.

The scouts, who each earned at least 21 merit badges, acquired leadership and outdoor skills, and completed independent service projects, are:

Kevin Box, 18, is the son of Michelle and Mark Box of Menlo Park. During Kevin’s seven years with the troop he has thoroughly enjoyed his outdoor experiences with the troop, including summer camp at Camp Meriwether in Oregon (three times) and on Catalina Island and his trek at Philmont in 2016. He served in a number of leadership roles, including patrol leader, quartermaster, and troop guide.

For his Eagle project, Kevin and a team of scouts he led provided landscaping and clean-up of the grounds at the Rich May Field in East Palo Alto. Rich May Field is used by soccer and rugby teams based in and around East Palo Alto. It was built and is maintained through contributions and volunteer work projects of community members.

Kevin attended Oak Knoll Elementary School and Hillview Middle School. He is a senior at Sacred Heart Prep and is captain of the SHP soccer team. He will attend Harvey Mudd College in the fall where he will study engineering and play on the Claremont Mudd Scripps soccer team.

Hazen Stribling, 17, is the son of Michela and Jeff Stribling of Menlo Park. He is currently the Senior Patrol Leader for Troop 206 and is a member of the Order of the Arrow.

For his Eagle project, Hazen led the building of 28 raised redwood planter boxes, a number of which were compliant with the Americans with Disabilities Act (ADA), for a North Fair Oaks Community Garden in Menlo Park. The boxes will help local residents grow vegetables.

Hazen is a senior at Menlo-Atherton High School where he has excelled academically. He is particularly interested in the sciences and mathematics and intends to study biochemistry in college. His ultimate goal is to go to medical school and become a surgeon. A gifted musician, Hazen has studied guitar for more than 10 years and has self published two albums of original music. He follows in the Eagle Scout footsteps of his father.