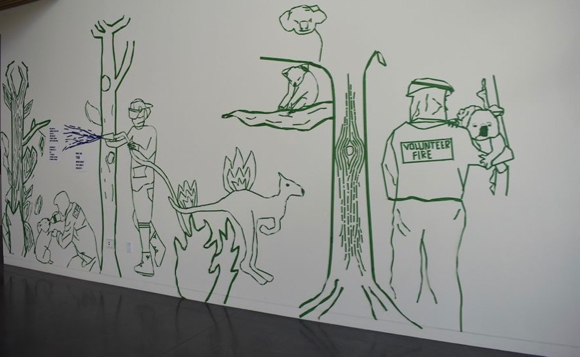 The opening of the William V. Campbell Academic and Arts Center at Sacred Heart Prep in Atherton has brought fresh opportunities for student artistic expression. SHP students arriving back on campus in January to start the new year were greeted by a life-sized mural of the devastating Australia bushfires displayed in the lobby, created entirely free hand — and constructed from painter’s tape. 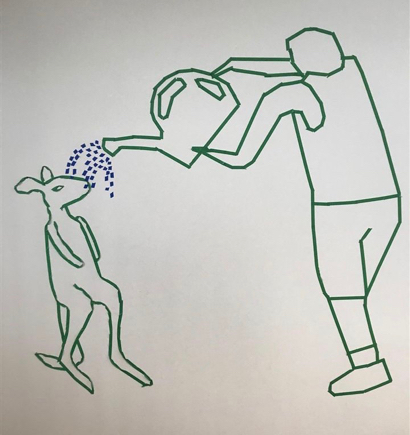 The artists were students in Peggy O’Leary’s studio art classes, who designed the mural using real images from the Australian crisis as resource material. With no pre-sketching, students pinched, pulled, and manipulated the tape directly on the wall to achieve an outcome similar to a line drawing.

“My message to students is that they have the power and skills to make statements through art about any issue, using any media. I appreciate their willingness to help bring this particular message about the climate crisis to Sacred Heart in such an impactful way,” said O’Leary.

This is the second “tape mural” displayed so far this year; the first was crafted in November to honor the victims of the Saugus High School shooting in Santa Clarita.

“As a class we felt it was imperative to address and face such crises as they were unfolding,” said O’Leary.

Sophomores Grace Duncanson and Olivia Gibeau said the project helped them learn about the Australian fires in depth, and the images of “regular people helping the animals and putting out fires was motivating,” said Gibeau. “[The mural] is in a very trafficked place — it reminds people what’s going on.”

“Using art as a way to fight for some form of justice is really meaningful,” said Duncanson, “because art always has emotion in it, so it’s very impactful [messaging to help] the cause.”

The mural is temporary. “It will vanish as suddenly it appeared, at the end of this month,” said O’Leary.