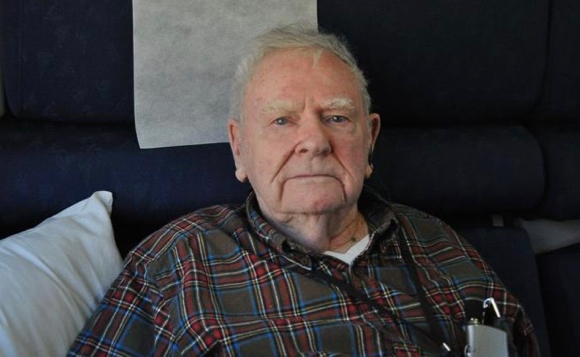 Former Atherton resident Thomas Chester Stapleton passed away on January 5, 2020, at the ago of 100 in San Rafael. A member of the Greatest Generation, he was born on November 22, 1919 in New York City to the late Thomas Chester Stapleton and Louise Vadala née MacPherson. He was preceded in death by his wife of 74 years, Helene Edith Stapleton née Timmsen; daughter, Alice; grandson, Scott Stapleton; and great grandson, Dominic Dodson.

Tom was the only child of notable parents: His father was a prominent New York City architect and his mother was a concert pianist who taught at the Julliard Music Institute and performed at Carnegie Hall. His parents divorced when he was just three years old and his paternal grandmother, Alice Stapleton, raised him in Providence, R.I. until he was 15 years old.

After his father remarried, Tom asked if he could live with him, his Dad’s reply was, “It’s not a good time right now son.” He felt rejected, alone and longed for a family. By age 16, his mother (now twice divorced) raised him and in 1935 they drove from Denver to Los Angeles, trying to make a new life in California.

In 1937 at Glendale High School, he met Helene. She also was a single child from a divorced home, and she and Tom met and fell in love on a week-long high school chemistry field trip — as they called it, “good chemistry.” The class valedictorian, she turned down a college scholarship to marry Tom after graduation in 1938. Tom began working at his Uncle George’s leather and shoe business in Los Angeles.

Three years later, he moved his family to the San Francisco Bay Area, where he worked at another uncle’s store (MacPherson Brothers) in San Francisco. In 1945, Tom was called to duty in World War II and left his wife and five daughters to serve in the US Merchant Marine. After four months training in New York as a purser-pharmacist mate, he left Helene and their five daughters behind as he sailed on a cargo vessel, SS Wild Hunter, from Seattle to the Far East and return. For his service in the war, he was later awarded Veteran’s status.

In 1951, he assumed the management of the San Francisco store after the untimely death of his uncle Kenneth MacPherson. Tom grew the wholesale business with Japanese footwear imports and later expanded into distribution of art supplies. He and Helene settled in Atherton where they spent 22 years raising nine children.

In the mid 1950s, Tom first bought a 16-foot sailboat, then a 22-foot in early 1960s, then a 27-foot sloop, then in 1973, a 40-foot oceangoing ketch that he and Helene sailed across the Atlantic from Gibraltar. After taking delivery in 1978 on their newest yacht, a 48-foot ketch (Helene II), just the two of them sailed from Europe across the Atlantic and through the Panama Canal to the Marquesas Islands. Then they continued to Hawaii and on to Vancouver, BC.

For their remarkable 12,750 mile sailing voyage as a couple, they were awarded the Cruising Club of American Perpetual trophy. They settled in the San Juan Islands of Washington State for 10 years before moving back to California. Raising their nine children in their Atherton home was their greatest achievement and satisfaction of their lives.

Tom was buried along side Helene at Holy Cross Catholic Cemetery in Menlo Park on Jan. 25 (second photo above.