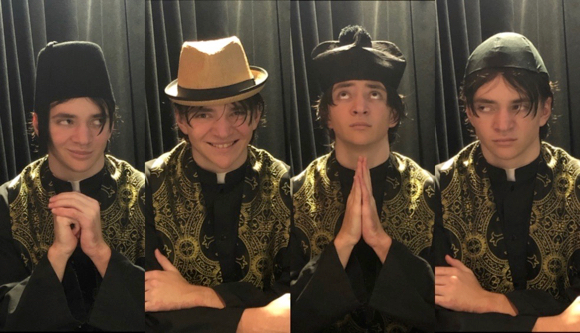 Tartuffe is cautionary tale of religious hypocrisy, bourgeois guilt and the danger of fervent beliefs unchecked by facts and reason. The once prosperous household of Orgon is turned upside down when the con-man Tartuffe ingratiates himself with the head of the family under the guise of religious piety. Tartuffe’s spiritual pretense is but a ruse for his real intention to divest Orgon of his fortune, and the gullible Orgon and his equally smitten mother can’t get enough of Tartuffe’s saintly act.

When Orgon breaks off his daughter’s engagement and hands her over to Tartuffe instead, he sparks a rebellious conspiracy by the rest of the household who are determined to expose Tartuffe for the charlatan he is. At its core, Tartuffe is a saucy and comedic story that sets the standard for using humor to combat religious hypocrisy, gullibility, sexism and patriarchal culture, making it as timely now as it was in the 17th century.

According to senior Isabella Madruga, who plays the part of the beguiled Madame Parnelle, “The dialogue, though old-fashioned, resonates with modern day chatter, and the characters, though exaggerated,  accurately represent archetypes in our society . . . We all have a Tartuffe somewhere in our lives.”

Though relevant and relatable, a 17th century French comedy is a challenge for any company. Senior Nils Forstall who plays the title role says, “Tartuffe is a mystery. He’s a lustful, devious scoundrel who wears a persona of piety and self-loathing to manipulate his vulnerable subjects. Developing and distinguishing the layers of deceit has been the hardest challenge I have ever faced as an actor. I have loved exploring the tension within Tartuffe — his feigned obsession with God to mask his unshakable obsession with earthly pleasures — and how that manifests in wonderfully uncomfortable comedy.”

Tartuffe marks the end of an era as it is Menlo Drama’s final show to be staged in Menlo College’s Florence Moore Auditorium. Menlo School’s state of the art theater — the Spieker Center for the Performing Arts — is currently under construction and scheduled to open for the start of the 2020-21 school year.

Continuing the tradition of philanthropy that Director of Creative Arts and Upper School Drama Steven Minning began seven years ago through Menlo Drama Gives Back. This production of Tartuffe will benefit Time’s Up Legal Defense Fund, a nonprofit organization that helps women in low-wage jobs pursue claims of sexual harassment by covering associated legal costs.

Tickets are $10 for adults, $5 for students, available for advance purchase at store.menloschool.org and at the box office one hour before each performance.