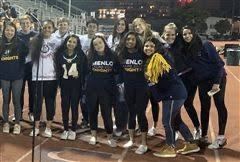 Singers from Sacred Heart Preparatory (SHP) and Menlo School will combine talents to perform the National Anthem before the February 23 Warriors game at Chase Center in San Francisco at 5:30 pm.

SHP music teacher Clement Cano cinched the opportunity after submitting a video of his students and Menlo’s performing the anthem together before the Valpo Bowl football game at SHP in November. Cano has previous experience conducting singers at a Warriors game.

Since they had learned the music for that game, no rehearsals are planned other than one three hours prior to the game. “They know it so well, they’re ready,” says Cano. “But I’ve warned them how fast-paced it’s going to be. We have to practice different standing arrangements, and we’ll only have 5-10 minutes for sound check.”

Students will then have courtside seats to watch the players warm up, and the overall opportunity will be a good “bonding moment,” says Cano.

“It’s a great learning collaboration with Menlo. It’s also a good experience to learn you have no choice but to get over stage fright, in front of an almost-20,000 audience. Their hearts are going to race. I’ve told them, ‘just don’t be distracted by your 50-foot faces on the jumbotron.’”

SHP dean of community life Matthew “Monte” Montenegro will also be performing at the game. He is a member of the Warriors’ new all-male hip hop dance team, “Blue Crew.” The team will be dancing for player introductions, throughout the game, and during fourth quarter timeouts.