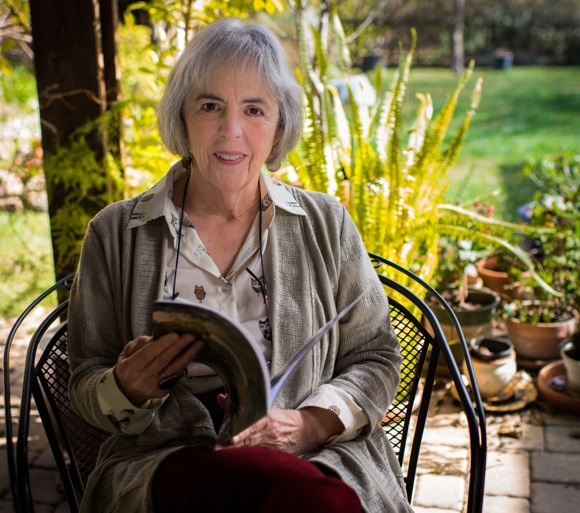 Editor’s note: To support authors with a poetic bent, we’ll be using poems from local poets from time to time on InMenlo.

Last Days is from Charlotte Muse, who writes: “Sometimes I think we might be facing the end of the world in our lifetime. In this poem I was trying to imagine a sort of modern-day version of the Last Judgement, and the shock and fear we might feel when confronted with it. I meant it to be a human poem, too, and a little humorous, since at extreme times, I think we really look for the simple comfort of each other while we try to face what’s happening (and also avoid it if we can).”

Charlotte (pictured) has a few copies of her chapbook left, A Story Also Grows, which costs $10.00; you can email her.

One evening, as we sat on our patio,
there was a great crack! and a hole opened
in the back yard. Dead souls streamed out,
unreeling upwards, all in black and white
and mildly lighted like an old movie.
And then there were more cracks! and more holes.
More souls, as if the topsoil were unknitting itself.
People fled inside and stared out
at all the spirits rising like a backward rain.

Since then, we’ve been waiting, for what
we don’t know. Is God nigh? That’s the question.
We’ve sent up flares and planes,
but there’s a thick cloud layer and no information.
And so, in the half-light our days have become,
we go to the churches to plead
and to the nightclubs for comfort,
pulling our chairs in from the windows
to watch the floor show at the center of the room.
The mayor in his top hat sings,
If you knew Susie like I know Susie-
Oh, Oh, Oh, what a girl!
At these times, the dead are like wallpaper.

This is not to say we can ignore them.
We’re trying to repent and not to dread,
though we don’t like walking through the dead.
You feel as if you’d passed in front of a projector:
there’s no sensation, but there’s a shadow on you,
and for a moment, a face replaces
your face. It seems only right to stand still.
It seems only right to run.