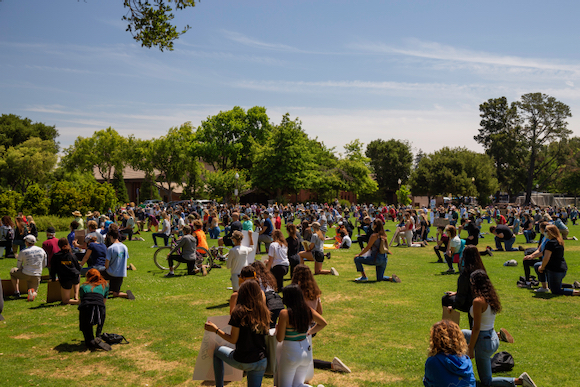 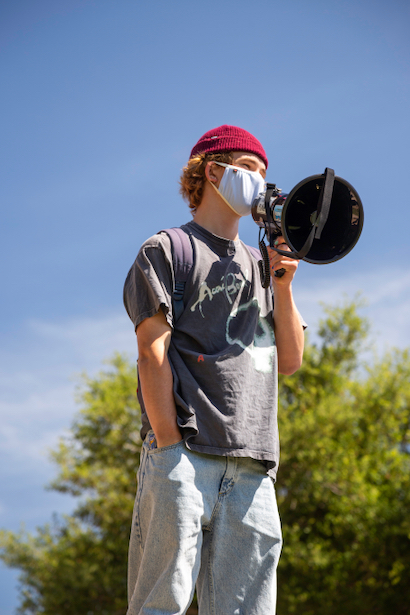 Hundreds of people turned out for today’s peaceful demonstration at Burgess Park in Menlo Park calling for all officers involved in the murder of George Floyd last week in Minneapolis to be prosecuted to the full extent of the law.  Organized by Menlo-Atherton High School junior Daniel Roman (pictured right), the event drew a crowd of families with school age children, teens, and adults of all ages, carrying signs asking for “Justice for Floyd” and “Demanding Change.”

“People just kept coming and coming,” said Menlo Park resident Haydi Sowerwine, who marched with the group to the park across from Stanford Shopping Center, where Daniel talked about “the future is up to us — and it matters to us.”

After reminding people to keep their face masks on and to stay six feet apart, Mayor Cecilia Taylor offered inspiring opening remarks, referencing that she is a fourth generation African American resident of Menlo Park and that she fears for her stepson and nephews’ lives. “There are policies we can put in place to improve justice and equity in Menlo Park,” she said. 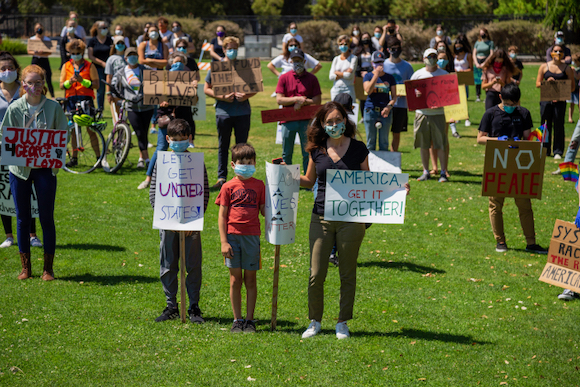 Police Chief David Bertini addressed the crowd, emphasizing that he and his fellow police officers were there to support the participants and keep everyone safe. That they did as participants walked along Alma Street, then across the bike bridge over San Francisquito Creek, with officers holding traffic at different points where appropriate.

The most moving part of today’s gathering was when everyone assembled on the field took a knee for nine minutes. Today a new autopsy report conducted by two respected forensic pathologists found that Floyd died from asphyxiation due to the officer holding down Floyd’s neck with his knee. This contradicts an earlier report by the medical examiner that said he did not die from asphyxiation but rather from “underlying health conditions including coronary artery disease and hypertensive heart disease” along with possible intoxication. Then later this afternoon, the medical examiner in the county where Floyd died said the death was a homicide. 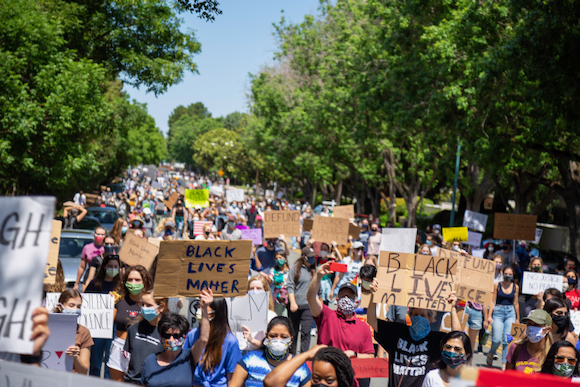 “It takes a lot of courage for a teen, or anyone, to get up there and organize around a very tense topic and in the midst of a very tense racial situation and to encourage social distancing and mask wearing during another tense situation: a pandemic,” said attendee Sarah Eisner. “I have so much respect for his efforts, and for Mayor Cecilia Taylor and the police force for joining in. I won’t ever forget nine minutes of kneeling, especially on the same field with a Menlo Park police officer. Daniel really offered me and my family, and so many others, an opportunity to grieve and connect to our intentions for the future.”

Reflecting on Floyd’s death after the event, Mayor Taylor said: “That it happened again; that it’s not a new occurrence. Now with technology we see more of what is happening. It’s horrifying and it’s nothing new.”

“For me the positive is that in my current position work can be done to help change our practices and procedures.” 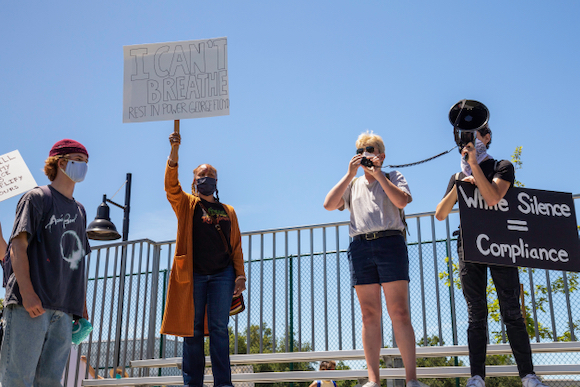 She admits that she, along with other’s in city government, didn’t know what to expect today. “The media presents all the negative things about protesters. They are missing the goodness that comes out of a protest, how the youth are expressing their feelings.

Her hope is that the students who protested — and even those who didn’t protest — will have a voice to talk about what they want to see changed. “We have to support them — we have to allow them the space to be creative  and give them empowerment tools now,” she said.