Dracula, A Comedy of Terrors is Menlo School’s offering on Halloween weekend 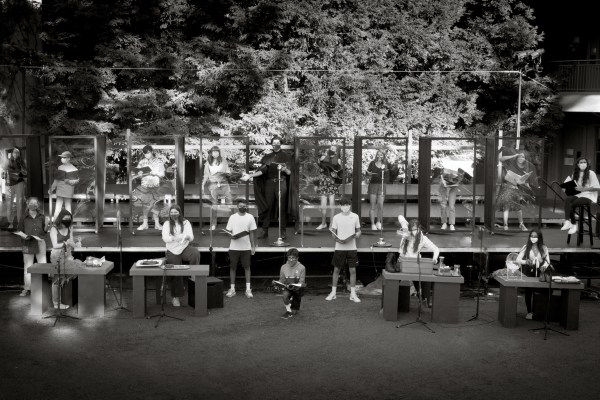 Menlo Drama is livestreaming Dracula, A Comedy of Terrors, a lightning fast, laugh-out-loud comedy by Gordon Greenberg and Steve Rosen on Friday, October 30, and Saturday, October 31, at 7:00 pm.  This hilarious production reimagines Bram Stoker’s epic horror story, with a dash of Mel Brooks and a pinch of Monty Python, as an old time radio play reminiscent of the vintage broadcasts of the 1930’s and 1940’s.

Dracula, A Comedy of Terrors follows the legendary Count Dracula as he travels to England to seduce the woman of his dreams, stirring up danger, magic, sensuality and silliness.  Created in the spirit of The 39-Steps and developed at Chicago Shakespeare Theatre, the show premiered at The Maltz Jupiter Theatre in Jupiter Florida last year and has been optioned for a Broadway production once Broadway re-opens.  Menlo School is the second group in the nation and the first high school to produce it.

With Menlo School’s new Spieker Center for Performing Arts set to finish construction and open this fall, Menlo Drama had to creatively reimagine their season this year. In the old adage, “the show must go on,” Menlo Drama intentionally chose this reimagined classic to give the drama students the opportunity to perform, and the community the chance to experience live theater during this unpredictable time.  The radio play will be performed on Menlo’s campus while simultaneously being streamed to the listeners and viewers safely in their homes – allowing Menlo to keep the arts alive during Covid.

One of the many unique aspects of the production is the stage.  Creatively designed by Andy Hayes and Steven Minning, the actors are encased on stage in movable Plexiglas cubes. This was first conceived to adhere to the Covid safety standards set by the county and state.  It has now been cleverly woven into the choreography of the show.

The Plexiglas cubes are designed with wheels on their bases, giving the actors a fluidity on stage that allows the cast to gracefully move with them and use them as doors to enter and exit a scene.  Another unique aspect to the production is a clever and talented cast of “foley artists” who use a variety of props to create sound effects and an immersive audio experience for the audience.

Steven Minning, Director of Creative Arts and Upper School Drama, chose this production for this season’s opener because “after reading the script last summer, I knew immediately that it was the perfect elixir for times like this.”  Minning, who is directing his 22 main stage show for Menlo School says “this new riff on a classic tale is a throwback to classic radio dramas – think suspense with punchlines – with sound effects so realistic that you will think you were there.”

Continuing the tradition of philanthropy Minning began eight years ago through Menlo Drama Gives Back, this production of Dracula, A Comedy of Terrors will benefit The Boys and Girls Club of the Peninsula. Over the past seven seasons, Menlo Drama has raised close to $50,000 for the benefit of nonprofit organizations, chosen by the casts of each production because their work resonates with the themes of the show. This entrepreneurial non-profit has effectively pivoted from tutoring for school support and college preparedness, to supporting students with distance learning and providing food for the communities they serve.  Viewers have the unique opportunity to support the Boys and Girls Club of the Peninsula by donating online during the livestream using this link,  https://www.bgcp.org/menloschool.

Performances are Halloween weekend, Friday October 30 and Saturday October 31 at 7:00pm via livestream. There is no charge.  This show is recommended for middle school audiences and up.