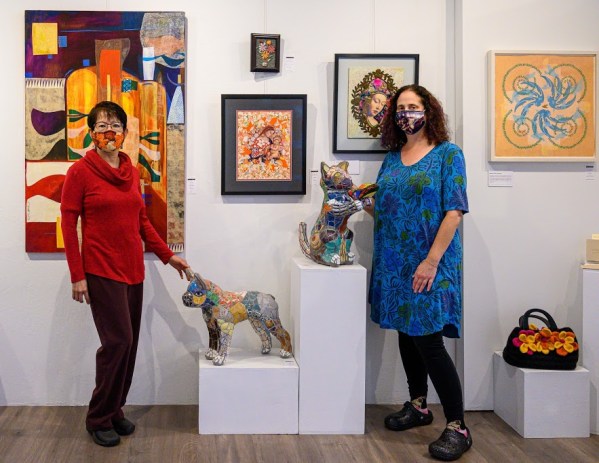 In October, The Main Gallery, which is celebrating its 20th anniversary this year, relocated from Redwood City to Menlo Park, taking over the space occupied by Marcela’s Village Gallery on Santa Cruz Avenue. A cooperative of 18 artists, the gallery features two- and three-dimensional works in media such as photography, mosiacs, collage, painting, jewelry, and ceramics.

We recently caught up with ceramicist Monica Waldman and mosiacs artist Xuan My Ho.

Monica told us that she spent many years in tech but had a growing feeling that she wasn’t making anything tangible. She took ceramics classes at the Palo Alto Center with the idea that she’d make decorative planters but instead gravitated to small ceramics pieces.

“I’d worked with Ed Bellinger at Foothill College, and he suggested I apply to join the gallery,” she said. “It was a bit terrifying, putting yourself out there when you display your art for sale. But I’m glad I did!” 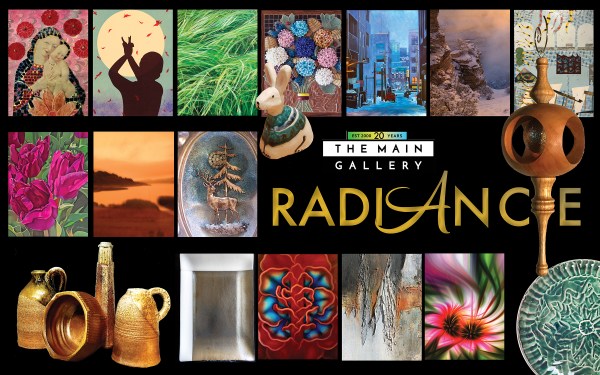 Xuan My Ho, studied medicine in Vietnam before immigrating to the United States in 1979. Like Monica, she ended up in high tech. Her interest in mosaics was sparked during a visit to Barcelona, Spain in 1998, where she saw  Catalan Modernist Antoni Gaudi’s work. That led to taking a mosaics class at College of San Mateo.

“After working on mosaics for over two years, my neighbor encouraged me to join the Kings Mountain Art Fair, held annually on Labor Day Weekend. Since I was a Woodside resident and I could get in without going through a competitive jury process, I decided to participate in 2001. Much to my surprise, I was able to sell a mosaic table top on the first day. On the third day, Neil Young, the legendary rock artist, came to my booth and bought the Four Seasons table set! From then on, I began to think of myself as an artist.”

My Xuan initially create her mosaics with ceramics, then expanded to different materials such as stained, vitreous, and tempered glass.  “I’ve added mirrors, seashells, slate and marble to make the finished art look more three-dimensional,” she explained.

“What I enjoy the most is being able to work on mosaics while listening to news, music, and sermons at the same time. Entering my studio invariably motivates me to create.”

The Main Gallery is open Wednesday through Sunday from noon to 6:00 pm or by appointment: info@themaingallery.org. An exhibit titled Radiance runs from November 27 to January 10. We suggest you drop in on Small Business Saturday on Nov. 28!