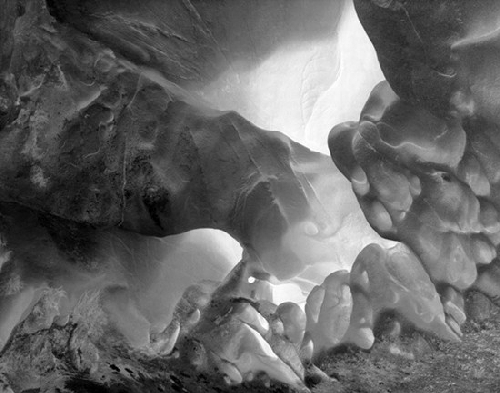 Tafoni—Accentuating the Negative, a collection of images by photographer Alan McGee of Portola Valley is the featured exhibit at the Portola Art Gallery in February. While there will be no formal reception due to COVID-19 safety precautions, Alan will be at the gallery on February 16, as well as by appointment.

Tafoni is the name given by geologists to the unusual and often beautiful honeycomb formations and shallow caverns created by natural weathering processes in the sandstone outcroppings that occur in the mountains of the San Francisco Bay.

Alan has photographed these natural forms and presents them as negative images which reverse the tonal values of the conventional print: white and black trade places, and only middle grey remains unchanged. The negative print has its own peculiar form of beauty.

Tafoni—Accentuating the Negative is also the title of Alan’s newest book, which will be available for sale during the exhibit. This book is part of Alan’s efforts, as an octogenarian, to create a photographic legacy. His first book, published in 2014, is entitled Rodin Revisited, and is placed at the Philadelphia Museum of Art, the Musée Rodin in Paris, and the Cantor Art Museum at Stanford University. The second book is entitled Beauty & Terror (2016), and his third book is entitled Woodlands (2019). He plans to place his books in libraries and museums that will make his work accessible beyond his lifespan.

The Portola Art Galley is located within the Allied Arts Guild at 75 Arbor Road in Menlo Park.