Statesman and scholar George P. Shultz passes away at age 100 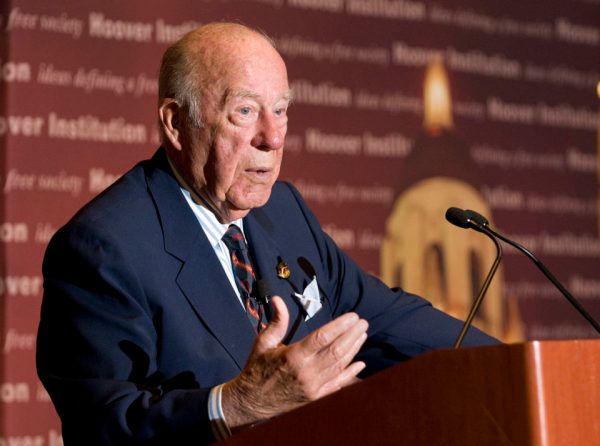 Former U.S. Secretary of State George P. Shultz, who served three American presidents and played a pivotal role in shaping economic and foreign policy in the late 20th century, died February 6 at his home on the Stanford campus. He was 100 years old.

One of the most consequential policymakers of all time and remembered as one of the most influential secretaries of state in American history, Shultz was a key player, alongside President Ronald Reagan, in changing the direction of history by using the tools of diplomacy to bring the Cold War to an end. He knew the value of one’s word, that “trust was the coin of the realm,” and stuck unwaveringly to a set of principles. This, combined with a keen intelligence, enabled him not only to imagine things thought impossible but also to bring them to fruition and forever change the course of human events.

U.S. Rep. Anna G. Eshoo (CA-18) issued this statement: “Our country has lost a world-renowned diplomat and statesman with the passing of former Secretary of State George Schultz. His patriotism and passion for public service have moved many to serve. He led a life of great purpose and magnitude, and it has been a great honor to represent him in Congress. Today there is one less jewel in the crown of California’s 18th Congressional District.” 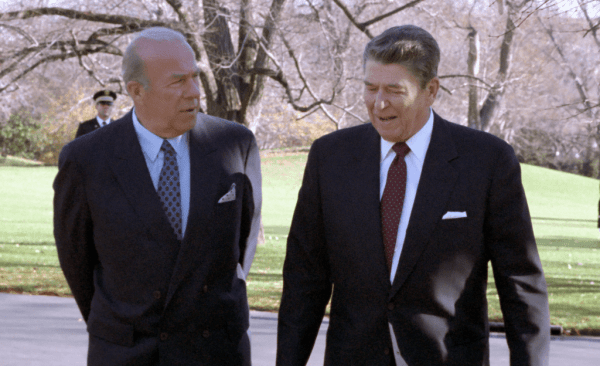 Shultz’s extraordinary career spanned government, academia and business. He is one of only two Americans to have held four different federal cabinet posts – State, Treasury, Labor, and Office of Management and Budget. He taught at three renowned universities, and for eight years was president of a major engineering and construction company.

Condoleezza Rice, a fellow former secretary of state and current director of the Hoover Institution, where Shultz served for more than 30 years until his passing, said, “Our colleague was a great American statesman and a true patriot in every sense of the word. He will be remembered in history as a man who made the world a better place.”

Shultz first joined Stanford in 1968 and had periodic affiliations with the university throughout his public service career, finally returning to campus in 1989. Always dedicated to his students and higher education, Shultz tackled some of humanity’s most difficult issues – including nuclear disarmament, climate change and democratic governance – in the classroom, in book and article form, and at events he hosted. Those issues drove him to keep working at Stanford nearly every day until his passing.

In 1982, Shultz was named secretary of state at a time of heightened global tensions with the Soviet Union. The full measure of his talent at negotiation came when Shultz implemented a foreign policy approach that eased those tensions and led to several landmark arms control treaties. Shultz also served as secretary of labor, the first director of the Office of Management and Budget and secretary of state, all under Richard Nixon. 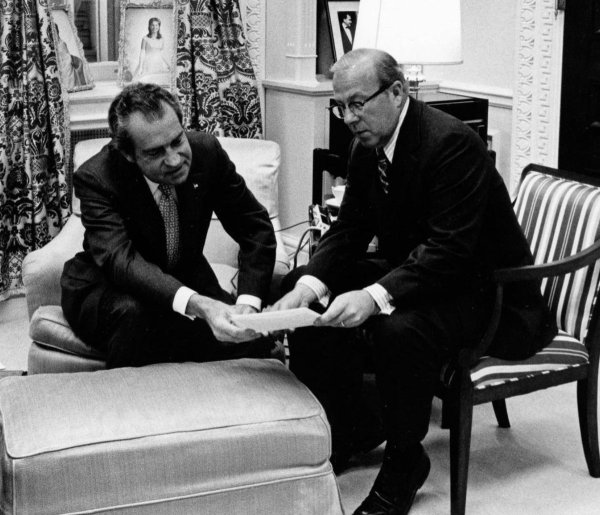 Shultz was renowned for his patient, credible and remarkably effective approach to diplomacy, most often eschewing the limelight to defer to the presidents for whom he worked. Along with his straightforward style, he had a hard-driving commitment to solving tangled policy problems and avoiding extreme partisan politics.

“In an age of nuclear weapons, maintaining collective security is no easy task,” Shultz said to Stanford graduates in 1983 when he returned to campus to deliver the Commencement address. “We must both defend freedom and preserve peace. We must seek to advance those moral values to which this nation and its allies are deeply committed. And we must do so in a nuclear age in which a global war would thoroughly destroy those values.”

His recent initiative at the Hoover Institution, Governance in an Emerging New World, revealed Shultz’s penchant for open discussions on how governments, institutions and society can best respond to rapid changes. He hosted about a dozen “governance” events on the Stanford campus starting in 2018 and in November 2020 co-authored A Hinge of History: Governance in an Emerging New World on some key insights that emerged from the multiyear series of roundtables and expert contributions.

Shultz earned his bachelor’s degree from Princeton University in economics in 1942. After graduating, Shultz served in the Pacific theater as a member of the U.S. Marine Corps from 1942 to 1945, eventually becoming a captain.

While stationed in Hawaii, Shultz met his first wife, Army nurse Helena “O’Bie” O’Brien, with whom he had five children. They were married for 49 years until her passing in 1995. He married Charlotte Mailliard, chief of protocol for the state of California, in 1997. 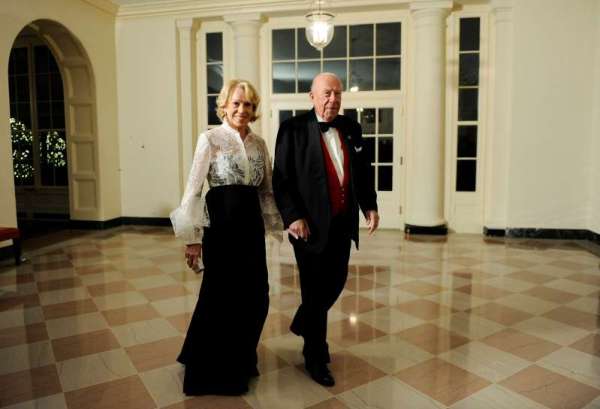 After his military service, Shultz continued his studies at the Massachusetts Institute of Technology, where he earned a doctorate in industrial economics in 1949. Shultz was an assistant and, later, associate professor of economics at MIT until 1957, when he was appointed professor of industrial relations at the University of Chicago Graduate School of Business. He served as the school’s dean from 1962 to 1968, where he led efforts to establish the first scholarship for minority students at a major business school.

In 1955, Shultz took a leave of absence from Chicago to serve as a senior staff economist on President Dwight Eisenhower’s Council of Economic Advisors.

Shultz’s first association with Stanford was in 1968 for a year fellowship at the Center for Advanced Study in the Behavioral Sciences (CASBS). However, his time at CASBS was cut short when Nixon asked him to join his Cabinet as secretary of labor in January 1969. In 1970, Shultz went on to become the first director of the newly formed Office of Management and Budget and then in 1972 was named secretary of the treasury, a position he held until 1974.

Shultz then accepted a part-time faculty position at Stanford Graduate School of Business, where he taught in the school’s Public Management Program – the first program of its kind to examine issues of public and nonprofit management and its relationship to the business sector.

During the Reagan administration, Shultz served as the chairman of the President’s Economic Policy Advisory Board (1981-82), in addition to his secretary of state position. After leaving government service in 1989, Shultz rejoined Stanford and also served at the Bechtel Group in leadership posts.

Shultz’s resolve for nuclear nonproliferation drew him to the renowned Stanford physicist and arms control expert, the late Sidney Drell, who served as deputy director for SLAC National Accelerator Laboratory from 1969 to 1998 and was a senior fellow at Hoover. They forged a productive professional partnership, becoming close friends and co-authoring numerous books and papers on how to rid the world of nuclear weapons, including the 2014 publication with Henry Kissinger and Sam Nunn, Nuclear Security: The Problems and the Road Ahead.

“Over the past four decades, the United States has been on an energy roller coaster that has landed us, unnecessarily, in a place that is dangerous to our economy, our national security and our climate,” Shultz said in a 2008 announcement for an initiative he launched at the Hoover Institution, the Shultz-Stephenson Task Force on Energy Policy.

Shultz co-authored The State Clean Energy Cookbook – a collaboration between the Hoover Institution and the Steyer-Taylor Center for Energy Policy and Finance – that provided states with guidance on energy-efficient initiatives. He also served as chair of the advisory board of Stanford’s Precourt Institute for Energy.

In early December 2020, right before his centennial birthday, Shultz wrote an opinion piece for the Washington Post, titled “The 10 most important things I’ve learned about trust over my 100 years.” He wrote:
“Dec. 13 marks my turning 100 years young. I’ve learned much over that time, but looking back, I’m struck that there is one lesson I learned early and then relearned over and over: Trust is the coin of the realm. When trust was in the room, whatever room that was – the family room, the schoolroom, the locker room, the office room, the government room or the military room – good things happened. When trust was not in the room, good things did not happen. Everything else is details.”