Dr. Clarence Jones in conversation with Menlo College provost and alum on February 11 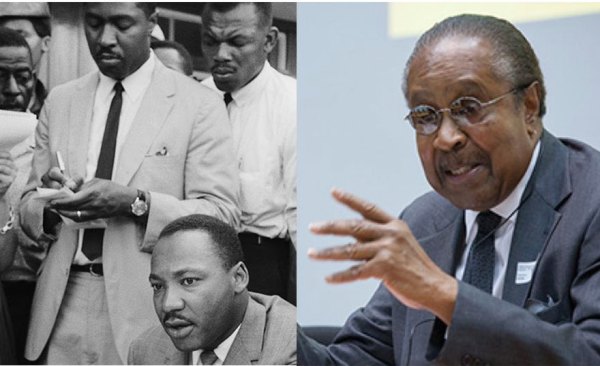 In celebration of Black History Month, join Menlo College in conversation with Dr. Clarence Jones, Scholar in Residence at the Martin Luther King, Jr. Institute at Stanford University and founding director of the University of San Francisco Institute for Nonviolence and Social Justice.

On Thursday, February 11, 2021 at 5:15 pm, Provost Grande Lum and Ngozi Harrison ‘19 will lead the college in conversing with Jones on social justice in the time of Black Lives Matter, particularly in the realm of higher education, and the lessons to be learned from the Civil Rights Movement of the 1960s. Register online.

Clarence Jones served as lawyer and speechwriter for Martin Luther King Jr., and was a member of King’s inner circle. He was the first African American to be named allied member of the New York stock exchange and defended the Southern Christian Leadership Conference in the renowned Supreme Court case New York Times v. Sullivan. Jones was founding director of the University of San Francisco’s Institute for Nonviolence and Social Change. Dr. Jones also kindly penned the foreword to Provost Lum’s recently published book America’s Peacemakers: The Community Relations Service and Civil Rights.