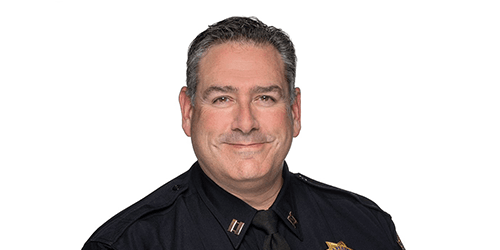 David Norris will be Menlo Park’s next police chief with an expected start date of March 22, 2021.

Norris comes to Menlo Park from San Mateo where he has served since 1993, having worked his way up the ranks from police service aide to police officer, police sergeant, police lieutenant and police captain. During his six years as police captain, Norris also served as San Mateo’s acting/interim police chief for periods from 2019-2020.

“Incoming Chief Norris is a well-respected and experienced law enforcement executive who will be a strong partner on our Menlo Park team. He brings an open mind, valuable insights and the necessary skills to help mentor and lead our police department,” said City Manager Starla Jerome-Robinson.

“I am proud to work in a County where police departments prioritize our connection with our community and our ability to work collaboratively with our communities and each other,” said Norris.  “It was incredibly important to me to take on a responsibility like police chief locally. I’m excited to get to know the people who live, work and play here in Menlo Park and the dedicated professionals who serve this community.

During his tenure in San Mateo, Norris managed multiple high-profile cases and coached many local law enforcement personnel though professional development and promotions. His work also involved the development of a comprehensive youth services unit. Norris formed the department’s first community and media relations unit, and over the past 10 years supported and developed San Mateo PD’s leading-edge community engagement strategy.

In addition to his 27 years of local law enforcement, Norris is well-known for his work in media and community relations. He was a co-founder of the Bay Area Law Enforcement Social Media Group and presented to regional, state and national events. He is also a member of the International Association of Chiefs of Police (IACP), currently serving on the Police Professional Standards, Ethics and Image Committee (PPSEI), an international team of subject matter experts working on revising the Law Enforcement Code of Ethics and creating scalable community engagement tools for police agencies of all sizes.

Norris holds a master’s degree in law enforcement and public safety leadership from the University of San Diego, and a bachelor’s degree in human performance from St. Mary’s College (CA).