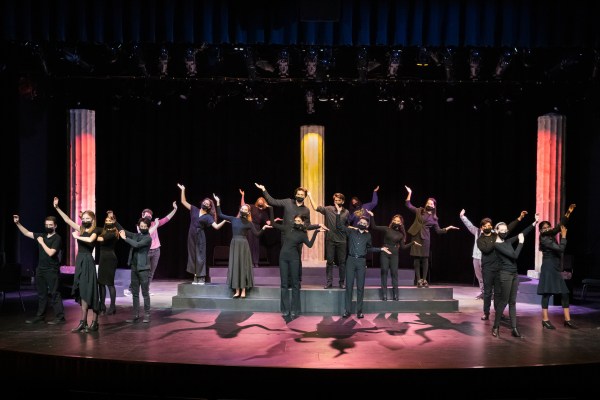 Menlo School Drama  is taking a departure from a standard musical or play for its latest production, instead producing  a selection of carefully woven together monologues and dialogues from known classics ranging from Sophocles to Shakespeare to Neil Simon. The show will premiere on Friday, March 26, 2021 at 7:00 pm online and will remain available for viewing after its premiere.

In historic times, the Greeks celebrated the opening of a new theater, and Monologues & Dialogues is the first show to be performed in Menlo’s newly constructed Spieker Center for the Arts.

Steven Minning, Director of Creative Arts and Upper School Drama, invited any student who wanted to participate in this performance to take part. “With the actors mostly performing solo, it gives them an opportunity to be part of the creative process in a unique way,” he said. “They were involved in the selection of the material and helped drive the show’s format. While we’d love to perform in front of a live audience in the new theater, circumstances have it differently. Inspired by the muses, we’ve found a way to bring theatre to you in the comfort of your own homes.”

The show will be filmed in the round and produced in advance of its airing, giving students the chance to perform inside Menlo’s newly constructed Spieker Center for the Arts in small groups. This state-of-the-art Spieker Center offers sophisticated lighting and sound technology, adding a unique visual and auditory dimension to each scene.