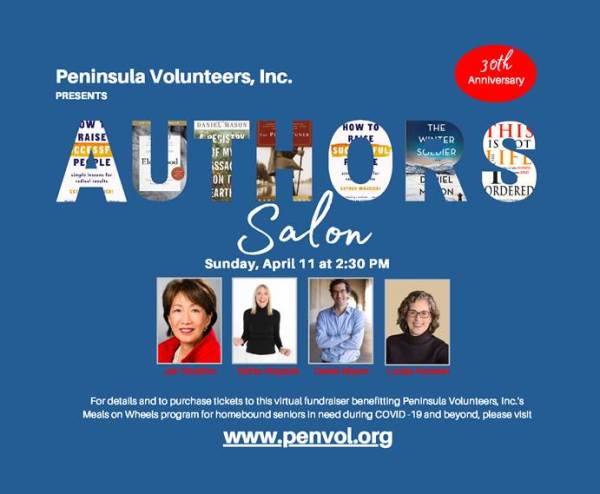 Join Peninsula Volunteers, Inc for the 30th Annual Authors Salon on Sunday, April 11 at 2:30 pm. The proceeds of this virtual event will benefit the Meals on Wheels program in ensuring seniors are supported through COVID-19 and beyond. Register online.

The emcee is Emmy-Award winning broadcast journalist Jan Yanehiro who received the Eleanor Roosevelt humanitarian award from the United Nations of San Francisco and was inducted into the Academy of Television and Radio Hall of Fame in New York. She is the Co-Chair of Diversity and Inclusion at the Academy of Art University.

Journalist, educator, and Vice-Chair of the Creative Commons advisory council, Esther Wojcicki founded the Palo Alto High School Media Arts Program and Co-Founded TractLearning. Her first book Moonshots in Education: Launching Blended Learning in the Classroom earned praise from educators, critics, and parents. Her most recent book How to Raise Successful People reflects on her own journey raising three of the most powerful women in Silicon Valley.

Daniel Mason is a physician and author. His award-winning work has been translated into 28 languages. His book The Piano Tuner was produced as an opera by Music Theatre Wales. An Asst. Prof. in the Stanford Dept. of Psychiatry, his research and teaching interests include the subjective experience of mental illness and the influence of literature, history, and culture on the practice of medicine.

Louise Aronson is a leading geriatrician, writer, educator, professor of medicine at UCSF and the author of the NY Times bestseller and Pulitzer Prize finalist Elderhood: Redefining Aging, Transforming Medicine, and Reimagining Life. For her academic work focused on aging, ageism and the use of narrative to improve health and health care, Dr. Aronson has received multiple awards. Her writing credits include the NY Times, Atlantic, Washington Post, Discover, Vox, JAMA, Lancet, and the New England Journal of Medicine, and she has been featured on NPR, TODAY, CBS, NBC News, Morning Edition, Politico, Kaiser Health News, Tech Nation and the New Yorker.