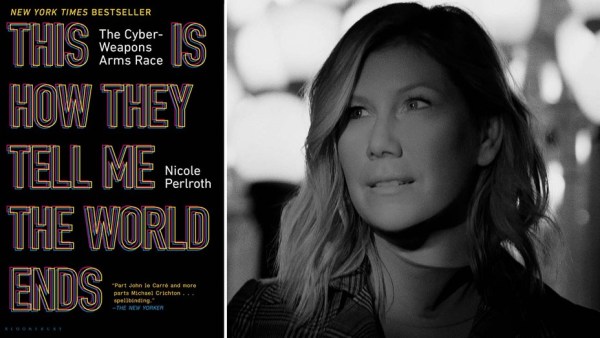 Since her book This Is How They Tell Me the World Ends: The Cyber Weapons Arms Race was released, New York Times cybersecurity journalist Nicole Perlroth has been making appearances (virtually) around the country. Recently the Portola Valley native and Menlo-Atherton High School graduate spoke to Menlo Rotary. She was introduced to club members by her M-A principal Eric Hartwig, who noted while she lives with her family locally, she increasingly prefers life off the grid in their cabin in the woods.

Nicole began with her personal journey. “I never worked on a school paper and never took a journalism class, although I did feel I was a natural story teller,” she said.

After graduating from Princeton, she worked for Ted Kennedy, was a consultant for a number of companies, did marketing for handbag company Coach. “I missed writing,” she recalled, “so I took a writing class at NYU. The professor was a columnist for the New York Post who encouraged me to try free lance journalism.”

Her first assignment made the cover of the Sunday New York Post with the headline “Rat Nap – Inspector Snoozeau” that focused on a health  inspector who failed a restaurant that Nicole had recently dined at and liked. There was a video of the inspector drunk and passed out at the bar; he’d made up the failed report. It led to the Health Department adopting new rules for inspections.

Another class — this time at Stanford — led to a job at Forbes covering venture capital and start ups and, in 2011, the New York Times.

“The Times approached me about covering cybersecurity,” she said. “I told them I knew nothing about the topic and, in fact, had actively gone out of my way to avoid it. They persisted and so began my illustrious entry to the Grey Lady — thrown into the deep end!”

She garnered awards for her reporting on efforts by the Chinese government to steal military and industrial trade secrets. “That was 10 years ago,” she said. “But every year since something insane has happened in the world of cybersecurity.”

Nicole’s book covers zero-day, a software bug that allows a hacker to break into your devices and move around undetected. As she describes her book: “It is the story of our vast digital vulnerability, of how and why it exists, of the governments that have exploited and enabled it and the rising stakes for us all.”

“My goal in writing the book was to wake everyone up,” she said. “Most people don’t know a market exists for vulnerabilities.”

For a deeper dive about the issues raised in Nicole’s book we recommend this interview with Fresh Air’s Terry Gross.