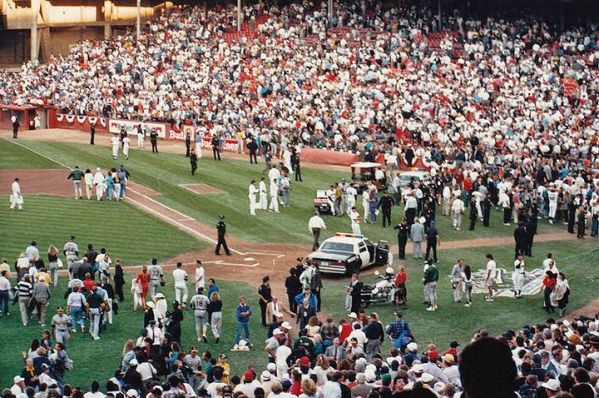 Today marks the 115th anniversary of 1906 earthquake that destroyed 80% of San Francisco, where my grandfather Wilmer Hubbard (born 1884) was living. Family lore has it that after first crossing the bay by boat to check on his mother, who lived in Berkeley, he walked to San Jose to see his fiancée Caroline.

Fast forward to the Loma Prieta earthquake in 1989. Son John and husband Chris were living in Menlo Park with my parents, but I was still in the SoCal, working for Modern Maturity magazine, which just happened to have its annual gathering for advertisers at the Mark Hopkins Hotel in mid-October.

A huge San Francisco Giants fan, I’d snagged a press pass and was on the concourse when the earthquake hit. I remember being able to see the floor buckle in waves. When the shaking stop, I headed to field to talk with the players and their families. Some 13 years later, I finally got to see the Giants play in a World Series.

Chris was watching John play high school water polo. The force of the quake caused waves high enough to wash a couple of players to the tarmac!

– MyShake app: A mobile app that can be downloaded for mobile devices at no-cost from Google Play and the Apple App Store. App location services must be set to “always on” so that ground sensors can alert those in the nearby area whenshaking is detected.

– Android Earthquake Alerts: An earthquake warning system available to any new or updated Android devices that uses that same technology as the MyShake app.

Learn the steps to help you be prepared for an earthquake.