Prepare for emergency evacuations by knowing your Zone 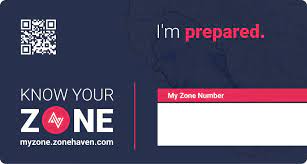 In the midst of wildfire season, it is always good to be prepared of an evacuation or emergency and know your zone. In the event of an emergency, first responders will use Zonehaven to plan and execute evacuations both large and small.

In order to understand whether your area is under an evacuation warning or order, you need to know your Zone Name. First responders will use the code to direct evacuations or issue shelter-in-place orders for specific zones across the Peninsula.

Emergency managers have carved the Peninsula into more than 300 zones on an online, publicly available map supported by Zonehaven, a California-based company under contract with the County of San Mateo. Each zone is assigned a short code. Enter an address to look up a zone.

The zones may not follow traditional neighborhood or even city borders. Instead, the zones are optimized for best evacuation routes and other factors and eliminate confusion about arbitrary boundaries.

In an emergency, first responders will issue evacuation or other orders and advisories based on the zones. This information will be pushed out via the news media, social media such as Twitter, emergency alert notifications and other platforms.

In the event of a wildfire or an emergency, law enforcement and fire agencies issue evacuation warnings or evacuation orders for impacted areas. These notices are issued for a zone with an evacuation status.