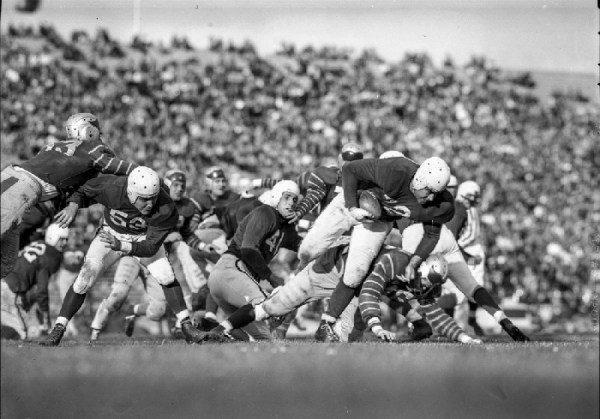 Thanks to San Francisco 49ers historian Joe Hession, this native Menlo Park resident learned something new: The 49ers trained at Menlo College from 1946 to 1954.

“The 49ers very first training camp was a homecoming for war heroes. On the first day of August in 1946, 50 men reported to Menlo College in hopes of earning one of the club’s 32 roster spots. Nearly 90 percent of the prospects were World War II military veterans. They saw action at virtually every major battle of the war, from Okinawa in the Pacific to Normandy in Europe.

“Jesse Freitas, a quarterback with the original 49ers team, earned a Bronze Star at the Battle of the Bulge.

“‘Most of us had experienced rough conditions before,'” Freitas said in an interview in 2014. “Football was just a game. I don’t think anyone considered football particularly difficult after returning from overseas.'”

“Prior to camp’s official opening, coach Buck Shaw spent a week in mid-July with the quarterbacks he had recruited to run his offense—Frankie Albert from Stanford and Santa Clara’s Freitas. Shaw was well-acquainted with both men. He coached at Santa Clara from 1929-1942 where he tutored Freitas during the early 1940s. And just up the road in Palo Alto, Shaw watched Albert lead Stanford to an undefeated 1940 season and a victory over Nebraska in the Rose Bowl.”

Hession continues the history by writing about Norm Standlee (pictured running with the football), who lived in Menlo Park for many years and whose daughters I knew from Menlo-Atherton High School. My father and many of our neighbors patronized the liquor store that Norm owned with Rolly Somers. Its location is where K&L is now.

“Norm Standlee also caught Shaw’s attention. Standlee starred on the Chicago Bears 1941 NFL Championship team prior to the war and immediately earned the respect of his teammates. Shaw noted his fullback returned from military service a bit heavy at 265 pounds. During two-a-day sessions, Standlee trimmed down to 245 and moved with the agility he displayed as an All-Pro in 1941.”

In those years after World War II, the 49ers were part of the All-America Football Conference as was their first opponent of the pre-season, the San Diego Dons, who they defeated 17-7.

Writes Hession: “In the first quarter, Standlee plowed over defenders from the one-yard line to cap a 52-yard drive and record the first preseason score in 49ers history. Tackle/kicker John Mellus booted the first extra point. Before the half ended, Mellus added a field goal from 25 yards out. It was a satisfying start to a 75-year journey.”