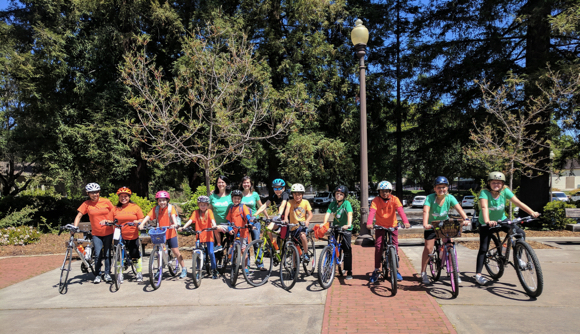 The Walk and Roll maps were created with the input of the schools and other key stakeholders from the Safe Routes to School community.

The suggested routes to school are usually located on low-stress streets that have bike and pedestrian infrastructures and where crossing the street is easier and safer for children, for example where there are crossing guards, marked or enhanced crosswalks or traffic lights. The map also contains a page with safety tips for pedestrians, bicyclists and drivers.

The map shows the distance in time from the school (e.g., 10 or five-minute walk) of the suggested routes, to help families plan their trip to school. The Walk and Roll maps were created in 2019 and are being updated for the 2021-22 school year.

More recently, the City has worked on an online version of the suggested routes. The interactive “suggested routes to school map” includes:
◦ All bike and pedestrian routes for all the schools
◦ Peninsula Bikeway route
◦ Sam Trans bus routes and bus stops
◦ Traffic lights, stop signs and crosswalks
◦ Private and public schools

You can find all the Walk and Roll maps on the Safe Routes to School webpage.