Virtual exhibition: California Votes—Exercise Your Right! on display through October 5 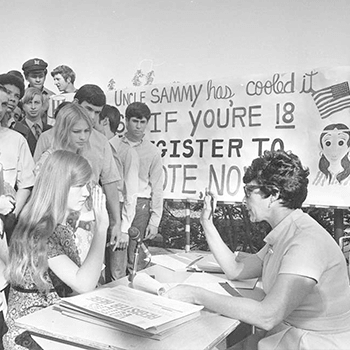 Timed to coincide with California’s anniversary of statehood and another wild election period, Menlo Park’s latest online exhibition takes visitors on a ride through state electoral history. View the exhibit.

Despite California’s influence on our nation’s politics, state voter turnout falls below the national average. While the political focus is usually at the federal and state levels, local political issues have a greater impact on our everyday lives.

In both English and Spanish, California Votes: Exercise Your Right! breaks down the importance of voting, demystifies referendums and ballot measures, and encourages you to make your voice heard on the local, state, and national levels. Explore:

California Votes: Exercise Your Right! originated at the San Joaquin County Historical Society and Museum as San Joaquin Votes: Exercise Your Right! This online exhibition is adapted from the traveling exhibition and brought to you by Exhibit Envoy and the City of Menlo Park, with partial financial support from the Friends of the Menlo Park Library.