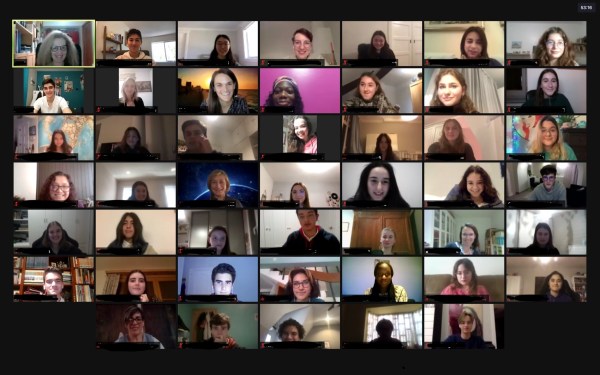 Last January, seeking to connect with peers around the world but unable to travel, junior Armin Hamrah (SHP ’23) came up with the idea of a virtual exchange program designed for high school students at Sacred Heart Schools, Atherton (SHS) and other Sacred Heart Network schools around the world.Hamrah recognized the significance of his generation sharing the experience of a global pandemic in a digital age, and the resulting mandated isolation, social distancing, and remote or hybrid learning.

“We had a lost sense of the world—all we could understand about the pandemic and other students’ experiences was what we read in the news. It didn’t feel tangible,” said Hamrah.

His curiosity was piqued. How were Sacred Heart students around the world managing life during a pandemic? How were other countries dealing with school shutdowns? How were other students coping with “Zoom school”?

These were some of the questions posed during the first international student meeting last winter between Sacred Heart schools in the United States, Europe, and Mexico. Hamrah utilized his French language background to translate questions and helped recruit 14 other SHP student participants, aided by faculty mentor Krista Hinton, SHP world languages teacher and global exchange coordinator, to formulate prompts in other languages.

“It was such a cool moment,” said Hamrah, describing the first meeting in February. “Around 50 people filled the whole Zoom screen from different countries. I had barely talked to anyone outside of my house at that point in the pandemic, much less that many people in different countries.”

Junior Bella Choi (SHP ’23) had always wanted to participate in a foreign exchange program, but never thought she would find the time—the virtual exchange filled the gap in a way that worked with her busy schedule. “This was such a great opportunity to meet new people, to interact with international students, and share how the pandemic affected us all,” said Choi, who is continuing with the program this semester as a student leader. “Hearing about the timing of their lockdowns there, and seeing how they reacted to my [experience here], was really interesting.”

Originally, the virtual exchange set out to meet monthly, but the program was so popular, it met every week, said Hinton, with schools divided into small groups that would generate topics of conversation. One popular topic was cooking, where various schools demonstrated recipes including salmorejo and gazpacho from Spain, spaghetti alla carbonara from Italy, and conchas from Mexico. Also popular was when a few schools gave virtual video tours of their campuses.

Hamrah continued organizing meetings over the summer; meanwhile, Hinton was involved in growing the program further. Two other Sacred Heart schools—Woodlands Academy of the Sacred Heart in Lake Forest, IL and Forest Ridge School of the Sacred Heart in Bellevue, WA—had formed a virtual “Solidarity and Sustainability” program for Sacred Heart Network schools in North America, which met monthly to discuss social justice issues. The schools learned about Hamrah and Hinton’s efforts and worked together with SHS to form a new umbrella group called Sacred Heart Global Academy (SHGA).

SHGA launched last Wednesday at SHS, with each participating Sacred Heart Network school admitting up to 10 students, who are then organized into small groups of eight to discuss various cultural topics chosen by students, with an additional language meetup once a month. This year, 32 schools are participating with 170 students enrolled and 30 faculty members acting as mentors. SHGA is split into two time zones: schools located in Spain, France, Italy, and Germany in one, and schools in Japan, Taiwan, and Australia in another. Schools in the United States and Mexico are in both time zone groups.

“Sacred Heart LIVE was born out of a necessity for connection and a desire for personal stories during the pandemic, but these virtual exchanges are here to stay,” said Hinton. “We’ve seen a consistent enthusiasm for this programming from Sacred Heart schools around the globe—students are eager to build an international community.”

Virtual exchanges won’t take the place of in-person exchanges, explained Hinton, nor are they intended to. “However, I believe that this program will prove to be an important building block in a student’s preparation for an in-person exchange or any kind of educational travel program.”