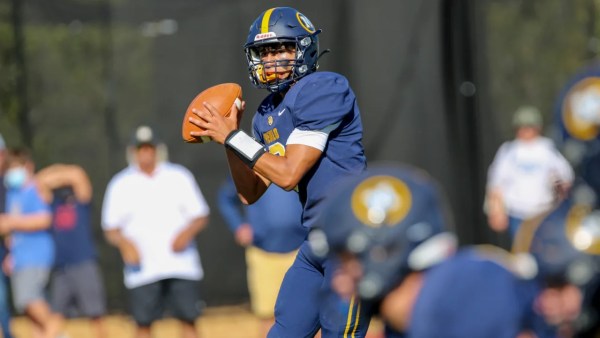 Menlo School quarterback Sergio Beltrain was week nine recipient of the 49ers PREP High School Player of the Week presented by U.S. Bank. Menlo High School will receive a grant from the 49ers Foundation to put towards its football program.

The award came following the Menlo School Knights victory over the Carlmont Scots by a score of 55-17 on October 29.  The senior quarterback finished off the night with six total touchdowns (three passing, three rushing).

Beltran grew up in the East Palo Alto area where he started playing football in the fourth grade. Beltran was inspired to get out and play his first season with the Redwood City 49ers after watching football with his uncle. In his first year, he played fullback before making the switch over to quarterback in the sixth grade. He credits his fullback days for teaching him how to be a physical football player.

In the summer, the team would go over to Hillview Middle School where they could run extra routes after their workouts. The pandemic changed his mindset when he was not able to play football in 2020. “Covid made me realize that every moment is precious and to go hard on every single rep,” said Beltran.

Today was the annual Valparaiso Bowl, pitting Menlo School against their up the street rival, Sacred Heart Prep. Menlo defeated the the Gators by a score of 18-15.

In other prep football news, Menlo-Atherton High School beat The King’s Academy on November 5, 35-21. The Bears are outright PAL champs and will head to playoffs next week. Seeding is set for Sunday.