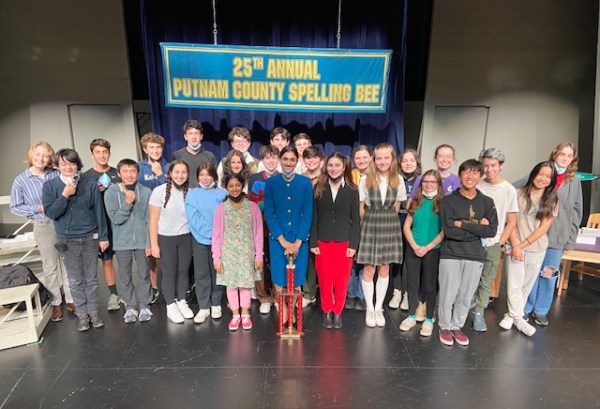 Menlo Drama is performing The 25th Annual Putnam County Spelling Bee, a clever musical comedy featuring an eclectic group of six middle schoolers vying for the spelling championship of a lifetime. Performances are Friday, November 12, and Saturday, November 13 at 7:30 pm, and Sunday, November 15 at 5:00 pm at Menlo School’s Spieker Center for the Arts, 50 Valparaiso Avenue, Atherton. Tickets are available online.

The show centers on a fictional spelling bee set in the geographically ambiguous Putnam Valley Middle School. Six quirky adolescents compete in the Bee that is run by three equally quirky grown-ups. While candidly disclosing hilarious and touching stories from their home lives, the spelling champions learn that winning (and losing) isn’t everything.

Steven Minning, Director of Creative Arts and Upper School Drama, is thrilled for Menlo Theatre to return to the stage and for the students to perform to in-person audiences in Menlo’s new state-of-the-art Spieker Center. Spelling Bee is the inaugural show for the 380 seat auditorium, which was  completed in 2020 in the heart of Menlo’s campus.

“Like most performance spaces across the globe, our brand new, beautiful theater sat vacant for the greater part of 18 months. But now, more than ever, it’s time to open up and celebrate theatre. The Show Must Go On!,” Minning says. “The determination, patience, and resilience of our students, parents, and staff have been amazing during these times. It is rewarding and meaningful to have the opportunity to perform for a live audience again.”

Continuing the tradition of philanthropy, the Menlo Drama Department strives to ‘give back’ both on and off stage. Menlo School’s production of The 25th Annual Putnam County Spelling Bee will raise funds for the Redwood City chapter of Project Read.

Menlo Drama has raised more than $50,000 for nonprofit organizations, each chosen by the cast because its work resonates with a theme in the show. Project Read was selected because, like The 25th Annual Putnam County Spelling Bee, Project Read celebrates the written word, seeing literacy as “the foundation for learning, opportunity, and success.”