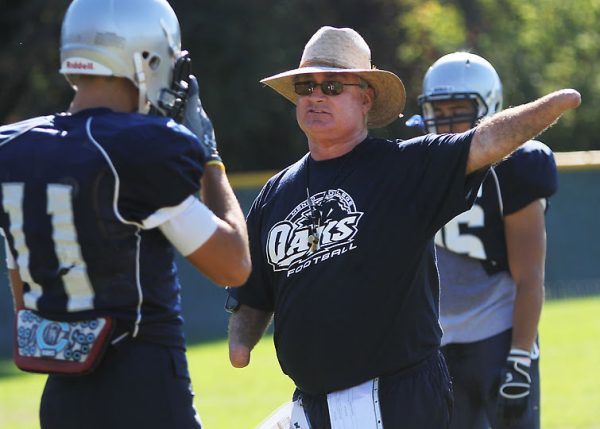 Alumnus Mark Speckman ‘74 will be the speaker for Menlo College’s 94th commencement ceremony on Saturday, May 21, 2022.

With a 40-year coaching career in professional, college, and high school football, Mark has persevered despite a major physical disability — being born without hands, being recognized nationally for his football expertise. He has been named a conference Coach of the Year 12 times and  has also been inducted into four Athletic Hall of Fames as a player or coach, including the Menlo College Athletics Hall of Fame. In the sport of football, Speckman is regarded as a leading developer of the “FLY” offense, a system he pioneered and used nationwide

“It will be an honor to host Mark Speckman at this year’s commencement ceremony. As a dynamic, resilient alumnus, Speckman’s perspective on overcoming adversity will be particularly inspiring for our graduates; all of whom have endured the pandemic during the majority of their college experience,” said Menlo College President Steven Weiner.

Speckman first joined the Menlo College community as a student himself, where he played football for legendary coaches Ray Solari and Don Bakie. In his sophomore year, Mark earned 2nd team all-league honors for the Oaks in the Coast Conference. After graduating from Menlo in 1974 with his Associates of Arts in Liberal Studies, Speckman went on to earn his Bachelor of Arts degree in Social Sciences at Azusa Pacific University. There, he played football as a linebacker and earned an honorable mention of All-American honors.

Speckman then embarked on a 17-year career as a teacher and coach. Along the way, he earned his Master of Arts in Health and Human Services from Columbia Pacific University. He went on to build a lifelong career in college and professional football coaching at Menlo College, Willamette University, the Canadian Football League’s Montreal Alouettes, Lawrence University, and is presently with UC Davis. When Speckman returned to Menlo College’s campus from 2012-2013, he served as the head football coach.

Speckman’s experiences playing and coaching football with his physical disability have paved the way for his accomplished motivational speaking career, with more than 400 visits to businesses, schools, prisons, athletic teams, and government agencies. He is also a published author. With Jason Niedermeyer, Speckman wrote Figure it Out: How I Learned to Live in a Digital World Without Digits, which is now in its second edition.

“I am honored to speak at Menlo College’s graduation ceremony this spring,” said Mark, “This is a special place for me; Menlo took a kid with no hands and gave him a chance to go to college. Menlo educated me, employed me — and housed me. I am fired up to be back to speak to the members of the Class of 2022!”