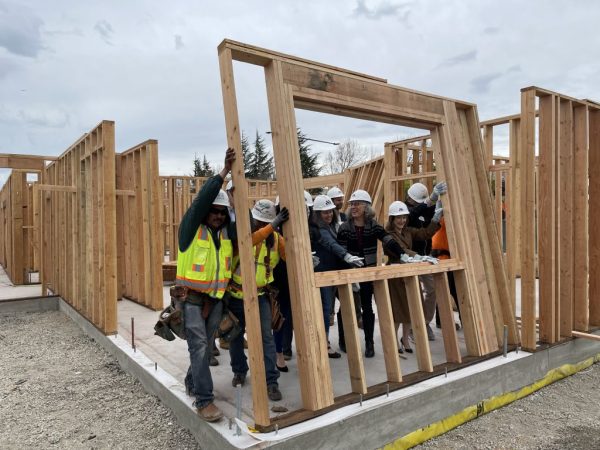 Earlier this month, Menlo Park Mayor Betsy Nash and San Mateo County Supervisor and Board President Don Horsley joined other city and county leaders to celebrate the revitalization and expansion of Gateway Rising, an affordable rental community being developed by MidPen Housing.

The revitalization and expansion of Gateway Rising is a response to the tremendous need for affordable workforce housing in Silicon Valley, one of the nation’s most expensive housing markets where many workers are being priced out. Originally built in the 1960s and acquired by MidPen in 1987, the original Gateway Apartments was a 130-unit affordable apartment complex spanning two city blocks in Menlo Park’s Belle Haven neighborhood, close to Facebook’s headquarters.

In 2016, MidPen redeveloped one of the blocks and 48 of the units which became Sequoia Belle Haven, 90 brand-new affordable rental apartments for seniors. The new Gateway Rising represents the final phase of Gateway Apartments’ redevelopment. With the work currently underway, 140 new affordable apartment homes will be constructed on what was the remaining 82 apartments’ footprint, resulting in a net gain of 58 affordable homes for families.

“We’ve long had a vision for revitalizing this community, which included providing additional homes,” said Matthew O. Franklin, President of MidPen Housing. “It took the City’s initiative to rezone the site to make that happen. We applaud their leadership and look forward to welcoming more families to the new Gateway Rising next year.”

In Spring 2013 the City of Menlo Park adopted its Housing Element, which allowed the Gateway Apartments site to be rezoned as High-Density Residential with an increase of 100 additional affordable apartments for families and seniors across the two communities. Sequoia Belle Haven and Gateway Rising represent Housing Element best practices for utilizing Affordable Housing Overlay zones to benefit the community, and jurisdictions have the opportunity to build and expand on equitable growth by replicating the policy tool in this current cycle of Housing Elements.

“We’re excited for this redevelopment and the opportunities it offers,” said Menlo Park Mayor Betsy Nash. “This new community provides much needed high-quality, affordable homes that help residents stay in the region where they have built their lives and raised their families.”

“I’m pleased to see this project come to fruition,” said Menlo Park District 1 Council member Cecilia Taylor. “At a time when displacement and gentrification are constant challenges in our neighborhood, Gateway Rising is a key part of solution for providing beautiful and affordable homes for residents of Belle Haven. I’m proud the City was able to develop a preference for existing residents in Belle Haven as part of this project.”

The City of Menlo Park and County of San Mateo provided early and deep financial support to the project. Additionally, the Housing Authority of the County of San Mateo committed 81 project-based vouchers for select units. Residents of the original Gateway Apartments have been temporarily relocated with assistance from MidPen and will be given priority on the new apartment homes at Gateway Rising. Additional residents will be selected via lottery and affordable housing qualification process. Seven units are set-aside for households who are experiencing homelessness. The community will complete construction and welcome residents in summer 2023.