1906 earthquake damaged buildings in Menlo Park but caused no fire 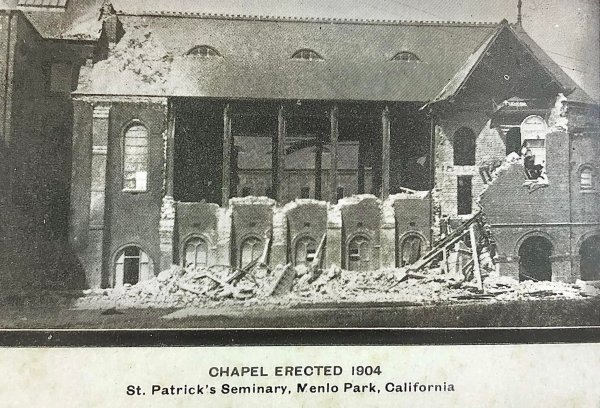 Retired Menlo Park Fire Chief Harold Schapelhouman posted in the Do You Remember (the old Menlo Park) Facebook group about the damage to the chapel at St. Patrick’s Seminary on Oak Grove Avenue (pictured above):

“The Seminary Chapel was rebuilt and damaged again in the 1989 Loma Prieta Earthquake. It was subsequently seismically reinforced and a fire sprinkler system added.

“The debris was buried around the campus. Firefighters at Station 1 using master stream appliances into the adjacent fields can unearth brick from the Chapel, third floor dorms and tower collapse.

“The Menlo Park Fire Department volunteers only had a small 1899 Hose Wagon that was reliant on the local hydrant water supply system to be able to operate. Unlike San Francisco, no major fires were fortunately reported in rural Menlo Park.”

The large brick Duff & Doyle building (pictured below), constructed in the late 19th century, was heavily damaged in the ’06 earthquake, but then repaired. The building was raised in 1942 to make possible the widening of El Camino Real toward the west  to be replaced first by a restaurant (The Walnut Tree, with private parking on the Santa Cruz Avenue side), and later by the complex that today consists of U.S. Bank, Stacks and Color Me Mine, with parking underneath. 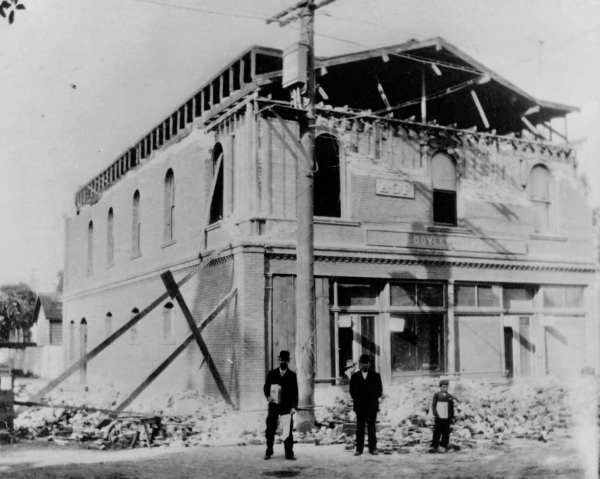