Nestled 30 feet underground in Menlo Park, a half-mile-long stretch of tunnel is now colder than most of the universe. It houses a new superconducting particle accelerator, part of an upgrade project to the Linac Coherent Light Source (LCLS) X-ray free-electron laser at the Department of Energy’s SLAC National Accelerator Laboratory.

Crews have successfully cooled the accelerator to minus 456 degrees Fahrenheit – or 2 kelvins — a temperature at which it becomes superconducting and can boost electrons to high energies with nearly zero energy lost in the process. It is one of the last milestones before LCLS-II will produce X-ray pulses that are 10,000 times brighter, on average, than those of LCLS and that arrive up to a million times per second – a world record for today’s most powerful X-ray light sources.

“In just a few hours, LCLS-II will produce more X-ray pulses than the current laser has generated in its entire lifetime,” says Mike Dunne, director of LCLS. “Data that once might have taken months to collect could be produced in minutes. It will take X-ray science to the next level, paving the way for a whole new range of studies and advancing our ability to develop revolutionary technologies to address some of the most profound challenges facing our society.”

With these new capabilities, scientists can examine the details of complex materials with unprecedented resolution to drive new forms of computing and communications; reveal rare and fleeting chemical events to teach us how to create more sustainable industries and clean energy technologies; study how biological molecules carry out life’s functions to develop new types of pharmaceuticals; and peek into the bizarre world of quantum mechanics by directly measuring the motions of individual atoms. 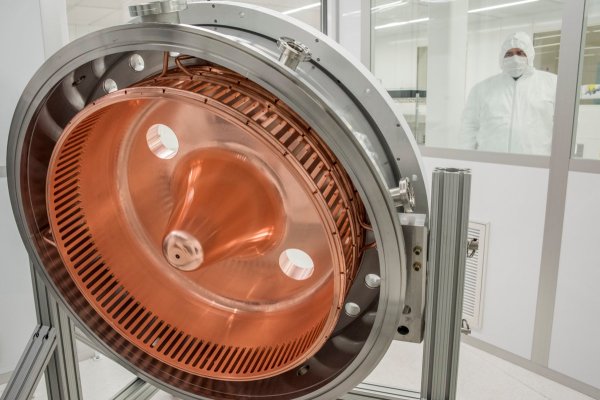 LCLS, the world’s first hard X-ray free-electron laser (XFEL), produced its first light in April 2009, generating X-ray pulses a billion times brighter than anything that had come before. It accelerates electrons through a copper pipe at room temperature, which limits its rate to 120 X-ray pulses per second.

In 2013, SLAC launched the LCLS-II upgrade project to boost that rate to a million pulses and make the X-ray laser thousands of times more powerful. For that to happen, crews removed part of the old copper accelerator and installed a series of 37 cryogenic accelerator modules, which house pearl-like strings of niobium metal cavities. These are surrounded by three nested layers of cooling equipment, and each successive layer lowers the temperature until it reaches nearly absolute zero – a condition at which the niobium cavities become superconducting.

“Unlike the copper accelerator powering LCLS, which operates at ambient temperature, the LCLS-II superconducting accelerator operates at 2 kelvins, only about 4 degrees Fahrenheit above absolute zero, the lowest possible temperature,” said Eric Fauve, director of the Cryogenic Division at SLAC. “To reach this temperature, the linac is equipped with two world-class helium cryoplants, making SLAC one of the significant cryogenic landmarks in the U.S. and on the globe. The SLAC Cryogenics team has worked on site throughout the pandemic to install and commission the cryogenic system and cool down the accelerator in record time.”

One of these cryoplants, built specifically for LCLS-II, cools helium gas from room temperature all the way down to its liquid phase at just a few degrees above absolute zero, providing the coolant for the accelerator.

On April 15, the new accelerator reached its final temperature of 2 K for the first time and on May 10 the accelerator was ready for initial operations.

“The cooldown was a critical process and had to be done very carefully to avoid damaging the cryomodules,” said Andrew Burrill, director of SLAC’s Accelerator Directorate. “We’re excited that we’ve reached this milestone and can now focus on turning on the X-ray laser.” 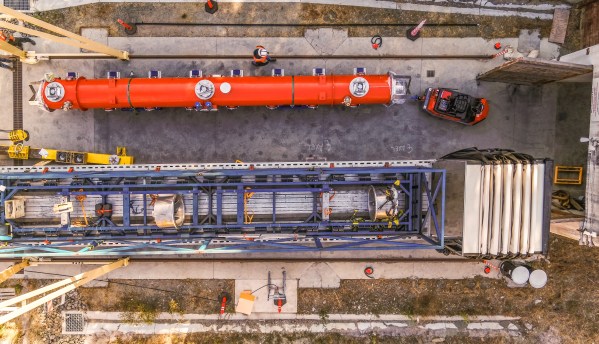 Bringing it to life

In addition to a new accelerator and a cryoplant, the project required other cutting-edge components, including a new electron source and two new strings of undulator magnets that can generate both “hard”and “soft” X-rays. Hard X-rays, which are more energetic, allow researchers to image materials and biological systems at the atomic level. Soft X-rays can capture how energy flows between atoms and molecules, tracking chemistry in action and offering insights into new energy technologies. To bring this project to life, SLAC teamed up with four other national labs – Argonne, Berkeley Lab, Fermilab and Jefferson Lab – and Cornell University.

“The LCLS-II project required years of effort from large teams of technicians, engineers and scientists from five different DOE laboratories across the U.S. and many colleagues from around the world,” says Norbert Holtkamp, SLAC deputy director and the project director for LCLS-II. “We couldn’t have made it to where we are now without these ongoing partnerships and the expertise and commitment of our collaborators.”

Now that the cavities have been cooled, the next step is to pump them with more than a megawatt of microwave power to accelerate the electron beam from the new source. Electrons passing through the cavities will draw energy from the microwaves so that by the time the electrons have passed through all 37 cryomodules, they’ll be moving close to the speed of light. Then they’ll be directed through the undulators, forcing the electron beam on a zigzag path. If everything is aligned just right – to within a fraction of the width of a human hair – the electrons will emit the world’s most powerful bursts of X-rays.

This is the same process that LCLS uses to generate X-rays. However, since LCLS-II uses superconducting cavities instead of warm copper cavities based on 60-year-old technology, it can can deliver up to a million pulses per second, 10,000 times the number of X-ray pulses for the same power bill.

Once LCLS-II produces its first X-rays, which is expected to happen later this year, both X-ray lasers will work in parallel, allowing researchers to conduct experiments over a wider energy range, capture detailed snapshots of ultrafast processes, probe delicate samples and gather more data in less time, increasing the number of experiments that can be performed. It will greatly expand the scientific reach of the facility, allowing scientists from across the nation and around the world to pursue the most compelling research ideas.