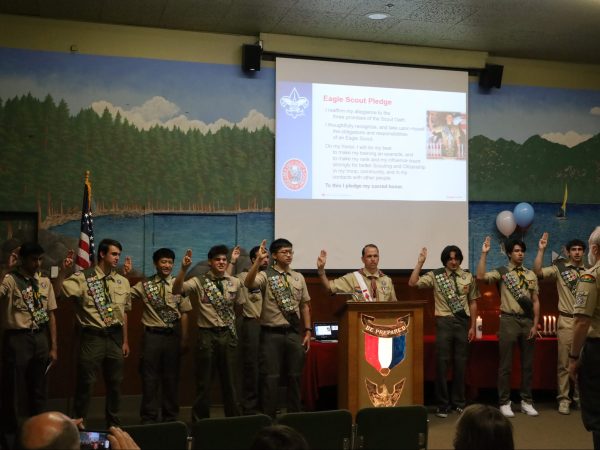 To attain the Eagle rank, a Scout must progress through six other ranks; earn a minimum of 21 merit badges; serve in a leadership position within the troop for at least six months; plan, develop and give leadership to others in a service project benefitting a school, a religious institution or the community; and demonstrate Scout spirit by living the Scout Oath and Scout Law. Only about 4% of all  Scouts complete what is required to earn the rank of Eagle.

The plan was not to have such a large Court of Honor, said Scoutmaster Joe Giarrusso, however, just like most other activities over the past couple of years, COVID forced our troop to cancel a planned Court of Honor in mid-2020 and because earning the Rank of Eagle is such a major accomplishment, the troop felt it was important to recognize not only our recent Eagle scouts but also those who did not have their Court of Honor back in 2020.

Nathan Tan – Menlo Park
Nathan graduated from Menlo-Atherton High School and is now a rising sophomore at Stanford University studying product design and mechanical engineering. For his Eagle Project, Nathan led a group of volunteers in renovating the music theory room for the Ragazzi Boys Chorus located in Redwood City. This included re-painting the walls, designing a mural, upgrading the lights, and implementing new furniture.

Lucas Giarrusso – Menlo Park
Lucas graduated from Menlo-Atherton High School and is now a rising sophomore at the College of the Holy Cross in Worcester, Massachusetts, where he is majoring in Political Science and Spanish. For his Eagle project, Lucas led a team in building playground equipment for Casa Hogar Bethel orphanage outside of Juarez, Mexico.

Kevin Rai – Sunnyvale
Kevin graduated from Fremont High School and is now a rising junior at San Jose State University, majoring in Computer Science. For his Eagle project, Kevin renovated 10 exercise stations around Columbia Middle School for the entire community to use safely. Kevin led a team to repair, paint and strengthen both the stations and posts which describes how to do the exercise.

Jason Hoang – Portola Valley
Jason graduated from Harker Academy and is a rising sophomore at Carnegie Mellon, pursuing a computer engineering major. For his Eagle Scout project, Jason built a bench and scoreboard and renovated the bocce ball court for the Ladera Recreation District

Alex Castelein – Menlo Park
Alex graduated from Menlo-Atherton High School in 2021 and is now a rising Sophomore majoring in Computer Science at UC Santa Barbara. For his Eagle Scout project, Alex designed and built four feral cat shelters for the Palo Alto Humane Society. This will provide feral cat communities shelter, as well as safety from human and animal predators.

Sam Thanassi – Portola Valley
Sam graduated from Pinewood School after starting high school at Menlo-Atherton High School and is loving Colorado College where he is entering his Sophomore year as a likely environmental science major. For his Eagle Project, Sam built and installed western bluebird nesting boxes for the Sonoma Land Trust on a parcel they manage since the species habitat is threatened by development and wildfires.

Avin Rai – Sunnyvale
Avin is a rising senior at Fremont High School. For his Eagle project, Avin created an informative videos in English & Spanish for teachers at San Miguel Elementary School to educate 4th and 5th-grade students about digital safety and the dangers of the internet.

Tristan Goodwin – Redwood City
Tristan graduated this June from Harker Academy and will be attending the University of Colorado in Boulder studying aeronautical engineering. For his Eagle project, Tristan worked with the Edgewood Park and Nature Preserve staff to help stop the use of social trails by building fences, installing signage, and completing trail restoration work.

Andrew Yagen – Emerald Hills
Led by Eagle Scout Andrew Yagen over the course of three days in late July 2021, more than 20 volunteers from Boy Scout Troops 109 worked to restore the trail to Inspiration Heights in Edgewood Park. The scouts dug trenches to add replacement logs along the trail border, installed the logs and nailed them into the ground, dug water bars into the trail, and shoveled dirt to fill the gaps in the trail caused by water erosion. Plaques with the principles of Leave No Trace were also installed along the trail to remind hikers to be mindful.

Andrew recently graduated from Menlo School and will be attending the United States Military Academy, West Point in the fall.

Cedrik von Briel – Redwood City
Cedrik just graduated from Woodside High School and will be attending Cal Poly Humboldt in the fall where he will be majoring in Wildlife and Communications. Cedrik Eagle project consisted of monitoring and recording the outcome of 24 bluebird boxes on the Sharon Heights Golf Course over the course of last year’s breeding season for the Sequoia Audubon Society Cavity Nesters Program. Additionally he built 16 bluebird and 3 owl boxes for new bluebird paths to be distributed by SAS by next year.