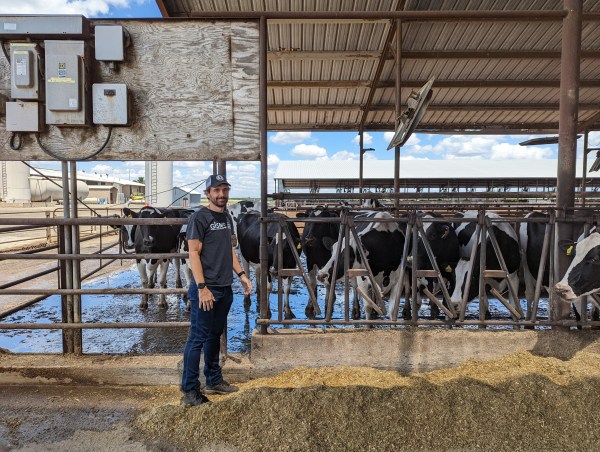 About one hundred miles from his office, Gustavo Cezar steps over a tall pile of hay. Taking care of hundreds of cows might seem like a strange duty for an engineer at the Department of Energy’s SLAC National Accelerator Laboratory, but Cezar loves this part of his job as much as any other.

“A lot of my lab work is experimental, so seeing projects in real life is satisfying,” he says.

This morning, he carries a ladder and screwdriver, and walks toward a group of five cows that are huddled under a large steel fan. They turn their heads and gaze.

“Cows are actually very curious animals. They notice anything new in their environment,” Cezar says. “If there is anything different, they are a little scared at first, but mostly curious.”

He climbs the ladder and unscrews a control box cover below the fan. The controller and fan are meant to keep the cows inside the barn cool and, well, alive. Heat stress can be deadly, particularly out here in Central California, so Cezar closely monitors the barn’s electrical equipment.

Four years ago, his team with SLAC’s GISMo lab – which stands for Grid Integration, Systems and Mobility – installed smart fans, solar panels, batteries, electricity meters, and weather sensors at the farm. Together they help to keep the animals cool inside the barn and minimize the farm owner’s electricity costs, specifically by collecting real-time data, such as from the temperature sensors and the local electricity rates. The system then optimizes the operation of the fans and batteries to ensure the fans run when needed and at the lowest possible cost – an approach that has saved the farmer thousands of dollars each month.

Given the extreme temperatures we have been seeing during the summer months, it is inevitable that cows will experience heat stress some days, Cezar says.

“In these extreme days, our system primarily focuses on minimizing the electricity cost by performing energy arbitrage during peak hours and peak shaving to prevent high demand charges, since fans need to be running at full speed,” he says. “However, on other days, we can also control the fans’ speed.”

The GISMo team hopes to develop a similar, more affordable load management solution for the other farms nearby. Future systems could require fewer fan control boxes so more fans run together, rather than independently. New systems could also monitor and control water sprinklers on the farm that spray the cows to keep them cool. These design improvements could allow more farmers to upgrade their energy equipment, which could increase renewable power usage and reduce electricity consumption in the industry.

“Farms are 24-7 operations – there are no breaks out here,” Cezar says. “We want to find ways to help farmers keep their livelihood – the animals – healthy by designing accessible power systems.”

Once in a while, the cows can become a little too curious, Cezar says. “You have to shoo them away before getting on a ladder,” he says, and laughs.

Most days, Cezar doesn’t worry about one-ton cows and ladders – he is working in his office at SLAC in Menlo Park, building software and algorithms and experimenting in the GISMo lab to help prepare the nation’s electric grid for the future. His team is currently modeling the ways in which the increasing number of electric vehicles in the state will affect the grid’s total load, infrastructure and reliability. The project uses data from 10 million charging events to predict future load growth scenarios.

“The electricity system is one of the most fascinating systems built by humans. How to make it cleaner and, at the same time, more reliable is critical,” he says.

The team is also testing battery storage systems inside a group of homes in Fremont. The batteries should help critical loads inside the homes, such as appliances, stay powered on during grid outages and reduce customer bills. The batteries can reduce bills by using their stored energy, mostly from solar generation, during times of high electricity prices or peak demand.

But out on the farm, among thousands of flies and the smell of manure, the rubber meets the road, so to speak, Cezar says. Without seeing how power systems perform in physical settings, he would not be able to build realistic models of the grid back in the office. He even thought about becoming a certified electrician, so that he could quickly build his own experiments and help on the farm more often. Completing a certification program is still a possibility, he says.

Gustavo’s love for animals began in his childhood in Brazil, where his family lived in a big city but owned a small farm in the countryside. The family farm had a few cows, goats, pigs, and chickens, and in summer, under the heat, he would take care of them all, something he hopes that his young children can do in the future.

“If all goes as planned, I can take my kids down to my family’s farm in Brazil during summer breaks,” he says. “Disconnect for a while, have fun, be happy, and learn about the hard work of farmers.”