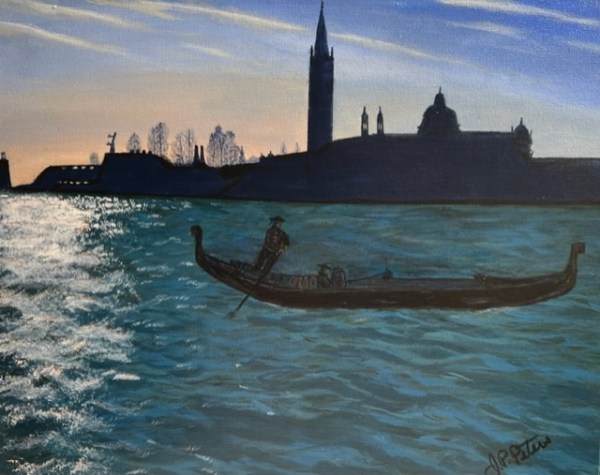 In August, the Portola Art Gallery presents Venice and Other New Works — paintings by Palo Alto artist Jerry Peters. While Jerry is best known for his paintings of old trucks and tractors in nature, this exhibition will include new works from a trip to Venice as well as other new paintings.

Jerry’s love of painting began after retiring from the fire service in 1996. He spent 30 years as a firefighter, the last ten as a Battalion Chief in the Menlo Park Fire Protection District. His career drove his early work in acrylics, which featured fire engines, fire helmets and fire scenes.

For the past 20-plus years, Jerry has specialized in portraits, landscapes and still life paintings. He has a special fondness for painting old trucks and tractors in rural settings, blending the beauty of nature with the character and history of battered vehicles.

In addition to his vintage trucks, Jerry often paints from photographs taken during his travels. His work includes scenes from France, Italy, Germany, Belgium, Egypt, Greece, England and Turkey, as well as from across the U.S. and Canada. Jerry explains that painting from photographs has allowed him to explore new challenges and work on different techniques. Throughout his artistic career, he has accepted numerous commissions for portraiture and landscapes.

“Venice End of Day” (acrylic, 16×20″) is one of the featured artworks in Jerry Peters’ August exhibit “Venice and Other New Works” at the Portola Art Gallery (75 Arbor Road at Cambridge Avenue).