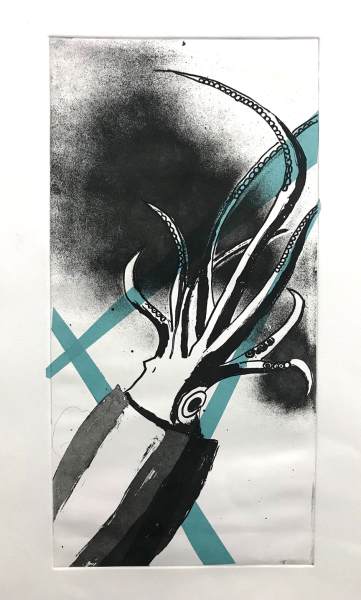 On Saturday August 6 — the 77th anniversary of the atomic bombing of Hiroshima —interdisciplinary artist Yoko Tahara will lead a participatory community art project in the outdoor space of Art Ventures Gallery. From 3:00 to 5:00 pm, participants will help create a block-printed scroll on the theme Threatening Water using Tahara’s carved images of fish and fish skeletons and water-based ink.

The event is organized by Menlo Park Public Art and is a prelude to Silicon Valley Sculpture (SVS2022) which takes place September 23-25 at Menlo College. This year’s theme is water, and 25 sculptors present their interpretation without any drop wasted.

More than 150,000 people died immediately in the August 1945 bombings of Hiroshima and Nagasaki. More suffered illness and death over the long term from the side effects of the radiation, and the trauma persists in cultural memory. After the war, nuclear technology — the so-called “peaceful atom” — developed into a source of electricity, the use of which is still controversial.

The purpose of Tahara’s work is to make others aware of the ecological and environmental damage caused by radioactive elements such as cesium and tritium from nuclear power plants. Her focus is on the threat of global fisheries and contamination of the human food chain. She notes: “I want to utilize my artistic potential to change society along with local community members in California and Japan.”

Members of the local branch of the Women’s International League for Peace and Freedom (WILPF), which advocates for global nuclear disarmament and supports the UN Treaty on the Prohibition of Nuclear Weapons, are partnering for the third time with Menlo Park Public Art and Art Ventures Gallery to commemorate the anniversaries of Hiroshima and Nagasaki.