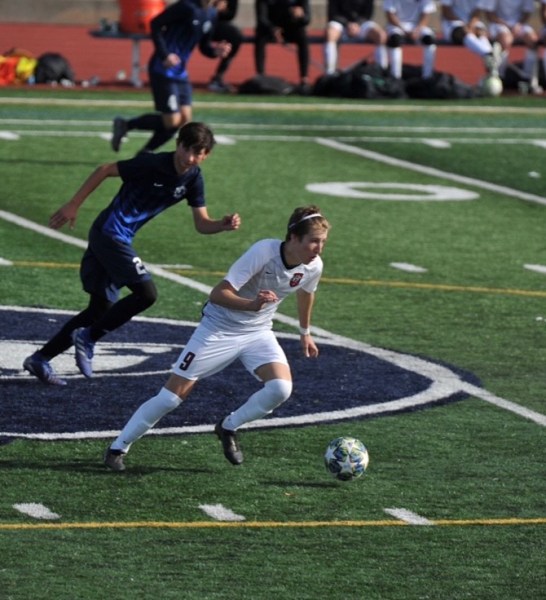 Kyle Nilsson (SHP ’21) led a soccer program for 20 Ukrainian children ranging from ages six to 17 in Pforzheim, Germany this summer.

Linking up with family friend and past Sacred Heart Schools (SHS) parent Frauke Janssen, Nilsson, a past SHP soccer star and current Middlebury College player, joined forces with Janssen’s non-profit organization GoldenHearts. GoldenHearts’ mission is to teach language and other skills to refugee mothers and children seeking a haven in Germany.

In an interview after returning from Germany, Kyle shared his experience spearheading the soccer clinic.

SHS: Tell us about your trip to Germany, and what led you there in the first place?

Kyle Nilsson: I was in Germany mainly for work. I was living south of Frankfurt in a little province called Darmstadt. I was there for a technology internship, working for a drone company called Wingcopter. They’re still in the developmental stages — I was there to gain experience working for a startup. I also wanted to live in another country for a month and a half or so.

I would work from 8:00 a.m. to 5:00 p.m. during the week, and on weekends, I’d visit places nearby in Europe, like Berlin, then London a few times, and Frankfurt. I turned 19 this summer, so I went to Frankfurt for a birthday celebration as well.

One of the weekends that I carved out was for this community service project. The destination was a small town called Pforzheim, about 90 minutes to two hours away from Darmstadt.

SHS: How did you get involved with GoldenHearts?

Nilsson: When I reached out to Mrs. Janssen originally, I asked, “How can we get this started?” Mrs. Janssen reached out to a sports club, called 1 CfR Pforzheim, and came back saying, “Hey, this is totally possible. The local club is happy to host and help with this camp— be here on this day at this time.”

I kind of didn’t know what to expect — I had a very vague plan about how the camp was going to go. I had never met the [club] coaches before and I had no previous contact with them. Basically, the business side of how the camp was orchestrated happened over just a few emails.

SHS: What were some of the biggest challenges in running the soccer clinic?

Nilsson: Language was the biggest challenge. There were four coaches, all a little bit older than me, and I’d say only two of them spoke good English. That meant it took us a bit of time to get ideas running. We ended up working together to make a schedule and get the list of kids signed up for the camp.

Right away we noticed we had ages ranging from six to 17. The question then was how to divide the camp up. We had about 20 kids and decided to split up the age groups. One of the kids was 17 and actually an academy player in Ukraine, so he was really good. We decided he would have personal training, while the other age groups could play games and exercises.

We quickly realized one of the biggest challenges was language, because none of the kids spoke English or German. I want to thank the coaches because without their quick thinking and willingness to help, we wouldn’t have been able to get the kids immediately engaged—we led them through basic warmups and played “duck, duck, goose” and some very basic kids’ games.

SHS: With the language barrier, how did you communicate to the children the various activities that were on the schedule?

Nilsson: We quickly learned that the best way was to show them how to do things, because communication was just so difficult and such a process. So, gestures, tone, and mannerisms were really important. And being excited when they scored and yelling, “Good job.” Having positive body language was also important to the success of the activities.

The coaches and I led small sessions — dribbling through cones, small-sided [small games] of two players vs. two players, or three players vs. three players, and practicing shooting goals. We did that for about two hours, had a break, and then led a big team scrimmage. That was super fun.

We divided the kids into two groups, we had goalies, and the coaches hopped in to play. For me, this was the best part — it was a beautiful, full-circle moment where everyone’s just enjoying basic scrimmage, and the kids are all smiling and having fun, and the coaches are participating, and all the parents were lined up on the side filming their kids playing. It brought me back to my childhood when I had no other worries except how to play the game.

Maybe the clinic helped take their mind off their situation for a moment. And maybe they’re too young to understand it, but I’m sure they understand that they’re going through a major transition or major shift in their life, where they’ve had to flee their homes.

After the game, a lot of the parents came up to the coaches to find out about having their kids join soccer, so that was a great outcome of the project as well.

SHS: This wasn’t your first time running soccer clinics, especially for non-profits. Tell us about past experiences that helped you prepare for this.

Nilsson: I’ve always been a huge proponent of sports as a community unifier and a way to communally have fun and build relationships. At SHP, I ran I soccer clinic my sophomore year for an organization called Grassroots Soccer, through Creative Inquiry with Mr. Moffat as my mentor. It was a great opportunity to allow for the sport to bring more people together in our community. I’ve taken that experience with me to college with a soccer clinic I just ran this year at Middlebury — it was the same concept as the Sacred Heart project, just in a college environment.