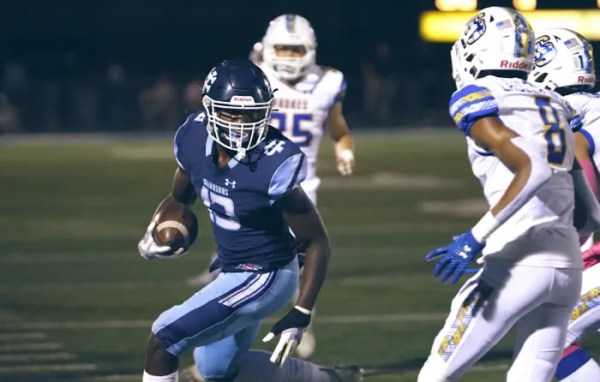 Editor’s note: The Menlo-Atherton Bears are set to kick off the 2022 football season against  Bellarmine College Prep at 2:00 on Saturday, August 27 on the Atherton campus. The “must watch” player is Jurrion Dickey who transferred from Valley Christian to M-A last week and has tweeted that his is cleared to play, which the school neither confirms nor denies. Jurrion was picked by Mitch Stephens (writing for the San Francisco Chronicle) as the top prep player in the Bay Area; Stephens ranked M-A as fourth in the Metro Bay Area. The article below by Chase Trigg appeared in the M-A Chronicle before the eligibility was announced.

Menlo-Atherton High School football coach Chris Saunders had never met Jurrion Dickey until Monday. Like most, Saunders was left — bowled over really — with an immediate impression.

“Wow,” Saunders said. “Quite a presence.”

The 6-foot-3, 210-pound is physically imposing standing still. But when Dickey goes up for the football he sets himself apart.

“His catching radius is humongous,” Saunders said. “I’ve never seen a high school athlete be able to catch a ball basically any where in his region. He just goes up and gets it.”

That’s what 5-star recruits do. And Dickey, the nation’s No. 2 ranked senior wide receiver and Oregon commit, was now suddenly a member of the Bears.

After three impressive seasons at Valley Christian, a private school 20 miles South, Dickey enrolled at Menlo-Atherton, a public school with an impressive recent run of victories and athletes.

But Dickey, with 120 career catches, 2,084 yards and 31 touchdowns at Valley Christian, is simply at another level.

Franklin was close, a four-star ranked the No. 3 receiver in the country by most services. The two are slated to be teammates next season.

Suddenly Dickey was at the disposal of Saunders, a thoughtful, human-first, 33-year-old coach who already had a pretty talented team he’d been working with for six months since the end of the 2021 season.

Saunders said getting Dickey acclimated socially to a new school and team was his first priority.

But, being an offensive-minded coach — he’s largely run the offense at all his four previous stops — he was certainly excited about implementing the physical, high-flying target into the Bears’ spread attack.

Dickey may have to sit out until midseason due to CIF Central Section transfer rules. Even if that’s the case, the Bears should have him for the league season and possible playoff run.

Saunders was getting his team ready for the second week of practice on Monday when Dickey arrived.

“I’d heard last week he might be enrolling here, but you just never know,” Saunders said. “Had a call from him earlier in the day, he was here at practice and away we went. I can tell you the quarterbacks were pretty excited.”

Saunders, starting his third season as head coach, said watching Dickey Monday reminded him a lot of watching Thomas and Franklin, both of whom are in the 6-2, 6-3 range.

“So similar in being so tall and fast and aggressive and instinctual,” Saunders said.