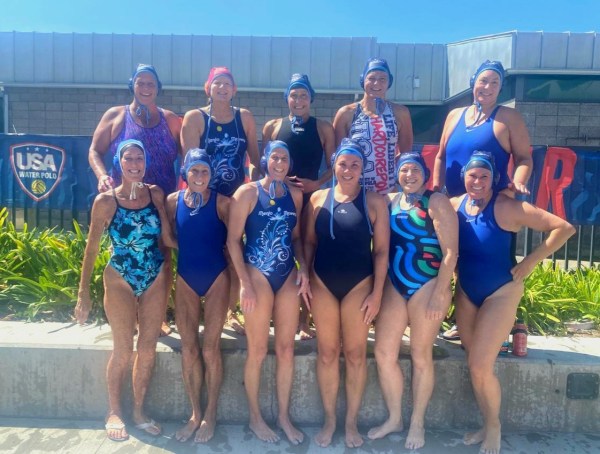 After taking home the Gold at the Senior Games in the East Bay last May, the Menlo Mavens 50s and 60s water polo teams came together again last month at the USA Water Polo Masters Nationals in Irvine.

Five teams competed in the women’s 50+ division this year. The Mavens combined forces with water polo players from Napa, Southern California, and Arizona for a roster that featured 11 athletes.

The team was named “Maflingo.” Mavens on Maflingo were: Blue, Katy, Carrie, Valerie, Jane, and Lark. Dion Gray, a Flamingo who joins the Mavens at times, played goalie and served as coach. The team went 1 and 3, beating Modesto/Stanislaus in their Saturday morning opener, 4-3 in the final half minute.

While there were no other wins for Maflingo after that first game, there were bright moments in each game, and the team played especially well and cohesively in the final game against Hawaii.

Check out more about the Menlo Mavens Master water polo club online; ages range from the mid-20s to 70s. Practices are Sundays 8:00 am to 10:00 am at Burgess Pool.