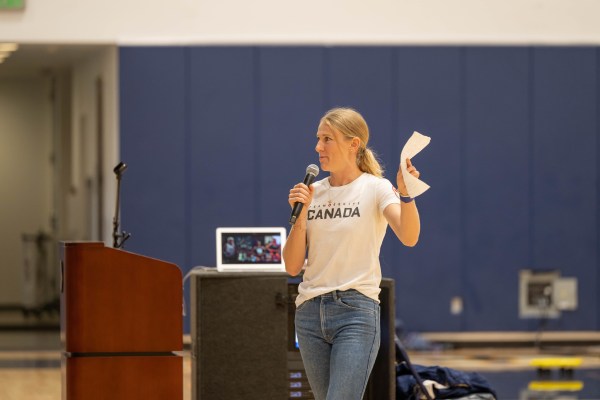 Olympic track athlete and Menlo School alum Maddy Price ’14 spoke with students at an Upper School assembly last week. She related her own struggle with perfectionism and urged the audience to fight well and control the controllables.

The Duke All-American and former Knights track and field, basketball, and cross country star returned to the Menlo Athletic Center to speak about her Olympic experience with the focus on the growth and lessons learned from detours along her road to the world’s biggest athletic stage.

She opened with an acknowledgement of how growing up in the fast-paced, competitive Silicon Valley area can lead to a need for perfectionism. Maddy asked current students to explain how they felt physically and mentally when they were under pressure to be perfect, and related how she, too, often fights those feelings. “It feels like I can’t make any mistakes, and it feels like I can’t take any risks.” 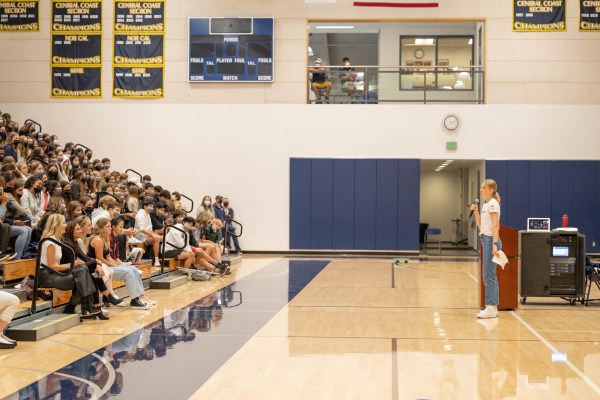 She pointed to the Olympic creed: The important thing in life is not the triumph, but the fight; the essential thing is not to have won, but to have fought well.

“Trying our best is good enough,” she said. “I 100 percent believe that when we trust our own efforts, these one percent changes and gains we make, that’s when we can be more free.”

She also noted that fighting well looks different for each person. Hers came when she lost her father to cancer while she was in college and not long after missing the 2016 Rio Games Olympic team. She then had to recover from foot surgery less than a year before Tokyo 2020, followed by the pandemic, Olympic postponement.“We have to allow our paths to have detours, they won’t be linear,” she said.

Price ran the 4×400 relay for Team Canada, which took fourth at the Tokyo Games in July 2021. She ran the fastest leg for her team and put Canada in medal contention. She is now speaking around the country and is an Olympic hopeful for the 2024 Games.

For more information about Maddy’s journey, her quest for the 2024 Olympics or her advocacy for mental health, please visit maddyprice.net.