Stanford and Cal mark 40 years since ‘The Play’ 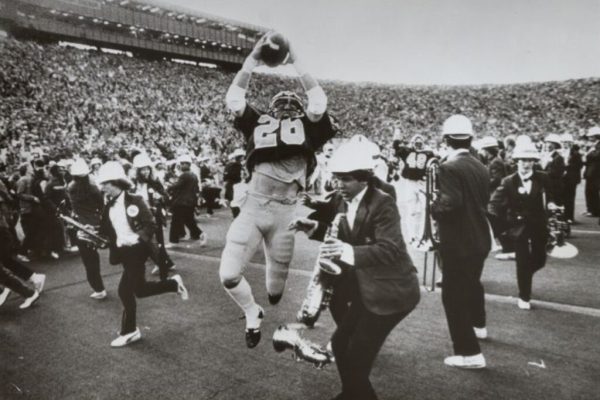 “The Band is out on the field!”

On Saturday, Nov. 20, 1982, the Bay Area rivals met in Berkeley for their annual matchup. But what started like any other college football game would end with one of the most iconic — and bizarre — plays in American college sports.

To commemorate the 40th anniversary of “The Play,” the Stanford Historical Society convened a panel of Stanford and Berkeley alumni to recount the history-making game. The event took place Tuesday at CEMEX Auditorium at the Stanford Graduate School of Business. It was moderated by Gary M. Pomerantz, Berkeley, ’82, a journalist and lecturer in Stanford’s Department of Communication, who interviewed author and journalist Tyler Bridges, Stanford, ’82, about his new book Five Laterals and a Trombone: Cal, Stanford, and the Wildest Ending in College Football History (Triumph Books LLC, 2022), which reconstructs the pivotal moments of the game. 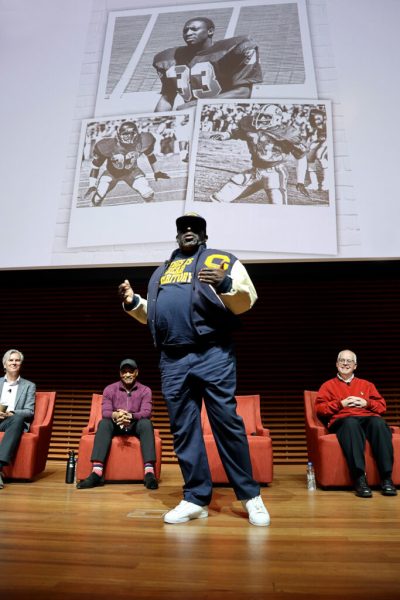 In his opening remarks, Pomerantz noted the significance of the final moments of the 1982 Big Game by quoting the late Sports Illustrated writer Ron Fimrite who, in 1983, wrote: “It is now called simply, The Play. There’s no need for further explanation because there’s never been anything in the history of college football to equal it for sheer madness.”

The Play
The 1982 game is considered the most thrilling Big Game ever — and not just because of how it ended. Throughout the game, both teams alternated leads. It was also the final college game for John Elway, ’83, and one he hoped would take him to the Hall of Fame Classic Bowl and lead to a Heisman Trophy. But what made the game particularly memorable was the strange sequence of events that led to its controversial conclusion.

At the end of the fourth quarter, Stanford was down 19 – 17. The Cardinal advanced the ball within field goal range, and Mark Harmon kicked what was initially thought to be the winning field goal. But with seconds remaining on the clock, Stanford, leading 20 – 19, had to kick off.

Cal’s offense caught the ball and drove it downfield in a chaotic play that involved five rugby-style laterals, during which the Stanford Band ran onto the field to celebrate what they assumed was a win for Stanford. But with the final lateral, Cal’s Kevin Moen ran the ball through The Band and into the end zone for a touchdown. In the process, he knocked over Stanford trombonist Gary Tyrrell (hence the title of Bridges’ book).

Chaos and confusion ensued as Cal’s players and fans celebrated, while the Cardinal were left wondering what had just happened.

“People didn’t know who had won the game. It was just such bedlam,” said Bridges, who noted that, in the moment, even Cal’s coach, Joe Kapp, didn’t know who scored the winning touchdown. “I think that just adds to the mystique and lore and craziness of what happened that day.”

The referees ultimately called the game for Cal, but not without protest. Stanford coach Paul Wiggin was convinced the referees had blown the call and urged them to overturn it, but to no avail. Stanford’s players, coaches, and fans were left stunned by the 25 – 20 loss to Cal.

“What people forget is that in a span of [seconds], you went from the thrill of victory to the agony of defeat,” said Gilmore. But he insisted that despite the outcome, “That play, that game was great for college football. It was great for the rivalry.”

Also contested were some of the laterals, which many believed to be illegal. On Tuesday, Anderson explained that the lateraling of the ball wasn’t spontaneous — rather it was part of the Cal football team’s warm-up.

“It is something that we did every Sunday as a practice,” Anderson said, noting that they also had several rugby players on the team who were used to throwing the ball that way. “It came naturally.”

When asked why The Band had rushed onto the field, Tyrrell explained that they were preparing for their post-game concert. Once there, he found himself in the end zone, where Cal’s Moen slammed into him. “I remember being knocked down,” he recalled. “And I got up pretty quickly, I think, to shake myself off, but it didn’t hurt physically.”

The game was not shown live on television, and it took hours for word to spread about what had happened. This was also before the era of instant replay, and there were no cell phones or social media to capture each moment as it happened.

“One of the reasons The Play could never happen again is because of all these advances in technology,” Bridges said.

The Play became a pivotal moment for many people involved. The loss cost John Elway the Heisman Trophy, which went to Hershel Walker at the University of Georgia. It led to a decades-old friendship for Tyrrell and Moen, who have shared their experience of The Play for various media outlets and events marking anniversaries over the years. And today, Tyrrell’s trombone sits in the College Football Hall of Fame in Atlanta.

“You can’t argue that it’s the most iconic play in the history of college football,” Gilmore said. “There’s nothing like it.”

125th Big Game
Both teams will mark the 40th anniversary of The Play this Saturday, Nov. 19, when they face off again for the 125th Big Game. Kickoff will be at 2:30 pm at FTX Field at California Memorial Stadium in Berkeley. The game will be televised by the Pac-12 Network.

This article originally appeared in the Stanford Report; Top photo by Robert Stinnett, The Tribune; second photo by Sunny Scott