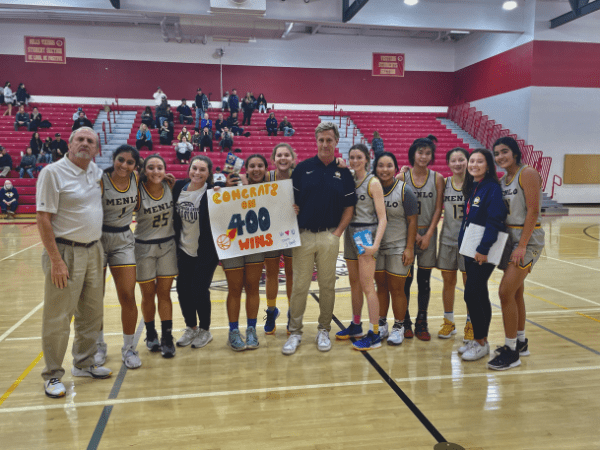 Menlo School alum John Paye (1983) directed his team into the final of the Mills Shootout on Thursday, and landed his 400th victory as Knights’ girls’ basketball coach.
Paye holds a 400-183 record, and led the Menlo girls to all four state championships in 1989-1991 and 2019.

As a player, he lifted the Knights boys to a state title in 1983.”I’ve been coaching through five decades; I don’t feel that old,” Paye said, laughing. “It’s really been a fun journey.”

His first coaching job was by chance. He had just been drafted by the San Francisco 49ers in 1987; then weeks into the season, the players went on strike. Paye, along with another quarterback, Hall of Famer Steve Young, stayed at Paye’s family home in Atherton not far from the 49ers former practice facility at Red Morton Park in Redwood City.

“We would go picket a little, then have an informal practice, and after, we had nothing to do,” Paye said.

He heard from older sister Amy that Menlo was looking for a girls’ basketball coach, so he and Young applied. Paye’s first stint at Menlo was that season through 1994 before he came back for the 2008-09 season. Now, Young’s daughter plays for Menlo.

Paye, a three-sport athlete, recalls his freshman year at Menlo in 1979, the first year that Menlo had girls’ teams and an athletic program. “I remember playing basketball, and we had a new gym, and some of my classmates were on that first basketball team — it was a special time.”

Since then, not only was he fortunate enough to coach his sister Kate’s team to three championships, he also coached all three of his daughters: Emma, Hannah and Georgia, as well as his niece Sylvie, and hopes to coach another niece at Menlo. He also loves that sister Kate is nearby as an associate head coach for Stanford women’s team.