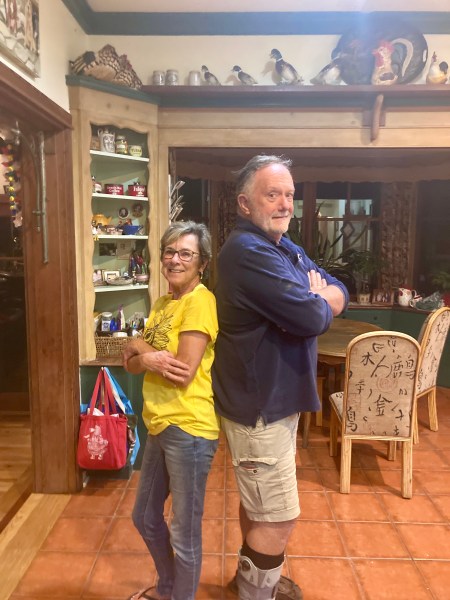 If your first date is less than ideal, don’t lose hope! Check back 50 years later. It worked for Menlo-Atherton High School alumni and fianceés Frank Merrill and Nancy Korb Brown.

“Nancy was a cheerleader. I asked her out — I was so far below her in the high school social hierarchy that there’s no reason at all she should’ve said yes, but she did! On New Year’s Eve, 1966, we went on our first and only high school date. I had a little too much fun, drank a little too much, sat down, stuck my elbow in the potato chips, and she said, ‘That’s it, I’m done with this! Take me home,’” Merrill remembered.

Merrill and Brown reunited at their 50th M-A reunion. Both of their spouses had recently passed away. Merrill recalled: “On the last day of the reunion, I was like, ‘Hey Nancy, what are you doing for dinner tonight?’ And she was like, ‘Nothing.’ And I said, ‘Great, we’re going out to dinner!’”

“Frank thinks it was all his idea, but you know…” Brown interjected with a smile.

The couple is currently engaged. “I put a ring on it!” Merrill said. They split their time between Merrill’s family home in Atherton and Brown’s near San Diego. Brown’s 6-year-old granddaughter Charlie said, “I’m gonna be the flower girl!”

I sat down with Merrill and Brown individually to discuss their careers, passions, hobbies, and life experiences thus far. Frank Merrill’s story (showing senior year photo)
“I’ve always loved animals. When I was young, we had ducks, chickens, turkeys, peacocks, and goats living in my backyard. CAW CAW CACAW!! Our neighbors hated the peacocks. That was my favorite hobby back then, taking care of the animals,” Frank said.

“When I showed up at M-A,” he continued, “I had a bad middle school GPA from Encinal. I had a ADHD as a kid, so school was hard for me. My counselor wanted to sign me up for Woodshop and metal shop classes and train me to be a mechanic. My mother marched over there and said, ‘Absolutely not!’ She went apeshit on that poor lady.”

Brown added, “I didn’t know his mother, but from what I’ve heard, she was quite a force.”

Merrill’s love for taking care of animals at home translated into a passion for high school science classes. He credited his M-A science teacher Harry Wong for inspiring him to become a veterinarian.

Merrill went on to study Animal Science at Cal Poly Slo. Midway through college, he decided he wanted to go to veterinary school. “By that point, I’d learned how to harness my ADHD and was a much better student,” he explained. “But I still got rejected from the veterinary schools I applied to.”

So, instead of setting out on the traditional path from college to veterinary school, Merrill moved to a ranch with one of his buddies. “We were gonna make a fortune selling beef to McDonalds, but that plan blew up because the U.S. cattle producers put the kibosh on it,” he said.

After abandoning the cattle ranch, Merrill decided he might as well go to veterinary school. By then, he was 31 years old. He attended veterinary school at the University of the Philippines before moving back to California.

“I really enjoyed the thrill of my veterinary work,” he explained. “When someone comes into the emergency room with a dog that just got hit by a car, it’s definitely an adrenaline rush. I got very good at focusing and figuring out what was going on.”

Early on in his career, Merrill worked night shifts at a horse track in Mountain View. He remembered, “I’d take my kids to daycare in the morning after my shift, and then come home to take a nap. One afternoon, I drove over to cash a check at the bank in my little yellow Volkswagen on my way to pick up the kids from daycare and — this will really surprise Nancy — I fell asleep in the parking lot.”

“Frank could fall asleep on a rock!” Brown teased.

Merrill continued, “When I didn’t show up to pick up the kids, the daycare lady called my wife, my wife called the bank, the bank said they hadn’t seen me, so my wife called the police thinking I had been abducted. I woke up to a policeman tapping on my window.”

This incident was a both literal and figurative wake-up call for Merrill. He decided to stop working night shifts to make more time for his family. “I wanted to coach my kids’ sports teams, and just be present and part of their lives. I didn’t want to be up all night anymore,” he explained. He then shifted to working with small animals and started his own veterinary business in Burlingame.

Merrill’s advice to current M-A students: “Own what you do. I consider one of the most important things I learned as a young man, as an eagle scout, is personal responsibility. My advice is to put in a lot of effort early on—meaning now, in high school and college. A lot of those guys who were always messing around and doing drugs in high school, that really didn’t help them 25 years later. They didn’t get where they wanted to be, in part because they just didn’t put in the work.”

Brown added: “Now, Frank and I don’t always agree on these things. We were both fortunate enough to have parents that were involved. Frank had two parents growing up. My dad died when I was 12, but my mom was very involved. Not everybody has that luxury. Some people can pull it out and still make it, but others struggle because they don’t have that guidance. That’s where schools come in—hopefully M-A is still doing a pretty good job at that.”

These days, Merrill enjoys veterinary-related and other volunteer work. He regularly volunteers treating homeless peoples’ animals in San Diego, and the M-A Bear News interviewed him in 2015 for heading a project building the Rich May Memorial Athletic Field in East Palo Alto. He also enjoys reading nonfiction, especially biographies. “Even though I’m in the fourth quarter, I just want to learn as much as I can,” he said. “I really enjoyed the social life at M-A. I wasn’t super into academics, but growing up, I always knew I wanted to be a special needs teacher. I really just wanted to get out of school so I could start teaching. My mom had been a teacher, and I said to myself, ‘I want to be a teacher too, but, darn it, I don’t want my mom to think it’s just because she said I should!’” said Nancy Brown.

“M-A was a very nice environment,” Brown remembered, “until the day Martin Luther King Jr. was assassinated. Immediately, there were violent instigators on campus. Our world changed in an instant. All the anger came out. It was a really frightening time. I remember my history teacher told one of the football guys to walk me to my car. I was like, ‘Well they’re not gonna do anything to me—I have my cheerleading uniform on!’ And then, one of the cheerleaders got beat up while standing at a vending machine.”

After graduating from M-A, Brown attended San Diego State and settled down in Southern California to begin her teaching career.

Brown’s favorite aspect of teaching was working with her students. She explained, “For half of my career, I was the chair of my team, which included a psychologist, speech therapist, and physical therapist. We would have meetings every morning. Most parents were really appreciative of our efforts, and the kids were so sweet and inspiring.

“Dealing with parents who were just coming to terms with the fact their kid was not going to the norm, probably not going to college, was sometimes hard. Some were just not great at being supportive of their children,” she added.

Brown’s advice to current M-A students: “Keep in touch with your friends from high school. As you go off to college or wherever you go after high school, you’ll change, and it’s really nice to have support from friends who knew you as you were becoming who you are going to be.

“And also, just have as much fun as you can in high school. Right now I know that things might seem daunting, but now is really the time to just enjoy everything. And don’t be too hard on your parents. As we say, we’re doing the best we can.”

Photo by Caroline Pecore (c) 2022; Caroline is a student at Menlo-Atherton High School