Learn why January is nest building time for Anna’s hummingbirds 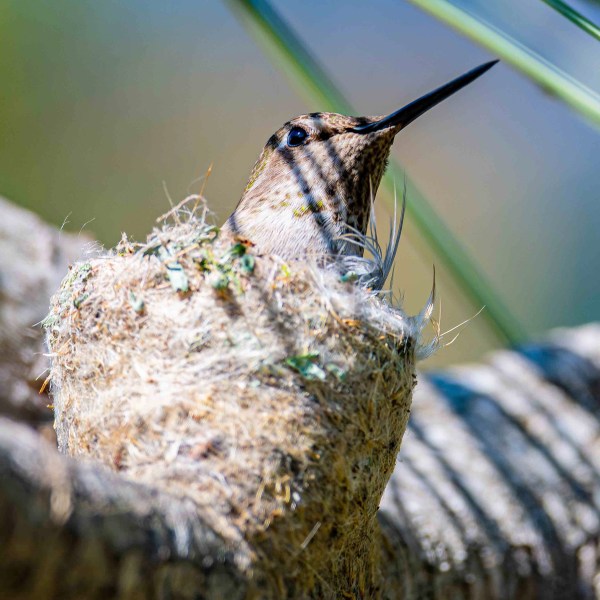 We’ve gained a new appreciation for Anna’s hummingbirds thanks to the photography of  Menlo Park resident Rick Morris, so a recent post by the Midpeninsula Open Space District caught our attention. It reads:

They time their breeding to the rainy season because rain signals the beginning of the blooming season for many of the plants on which hummingbirds rely for food. Winter rains also bring an abundance of little insects, which make up a significant portion of the Anna’s hummingbird’s diet, especially during the breeding season. A nesting female Anna’s hummingbird will collect up to 2,000 insects in a single day to feed both herself and her growing chicks, which need a high-protein diet for proper development.

Unlike the Bay Area’s other hummingbird species, which migrate down to Mexico when the weather gets colder, the Anna’s hummingbird can be found wintering and breeding as far north as Vancouver Island. Their cold tolerance allows them to stay a step ahead of other hummingbird species, which tend to breed a little bit later, and to time their fledging with chaparral, currant and gooseberry blooms (their main sources of food in their native range). Breeding early also gives Anna’s hummingbirds a chance to have multiple broods per year, usually two or three.

The Anna’s hummingbird’s range did not always extend so far north. Historically, the Bay Area was the very northern tip of their winter range. In other words, there were very few Anna’s hummingbirds who stayed here through winter. The increased popularity of hummingbird feeders and garden plants that provide blooms year-round are the major reasons that Anna’s hummingbirds have expanded their range.