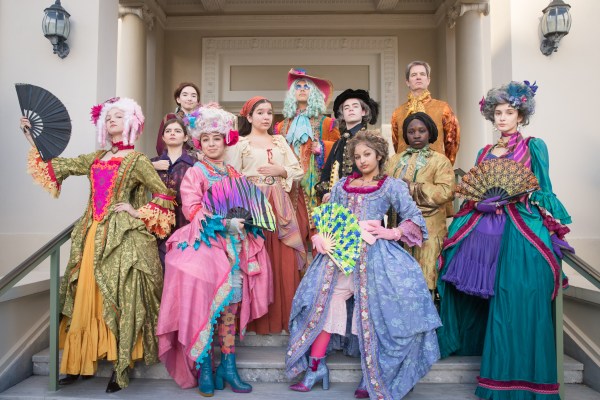 Menlo School Drama is presenting Molière’s The Learned Ladies, a 17th century satire about academia and the sexes this coming weekend, January 28-30. Proclaimed to be one of Molière’s most popular comedies, The ‘Menlo’ Learned Ladies, is a fast-paced whirlwind of verse and farce that boldly merges entertainment and education with the perfect balance of wit and satire.

Adding to the over-the-top, elaborate production are gorgeous 17th century period costumes that accentuate the outlandish, opulent nature of the show. The custom-designed costumes and outrageous wigs were created specifically for the professional Asolo Repertory Theatre in Sarasota, Florida.

Menlo Drama performed The Learned Ladies at last summer’s Fringe Festival in Edinburgh Scotland.  Steven Minning, Director of Creative Arts and Upper School Drama initially chose the show for the Fringe Festival because he says “I’ve always found it fascinating that a play that was written 351 years ago remains so timely. Molière had the foresight to write a feminist piece that speaks to the idea that women have a much larger role in society than having a pot to stir or a button to sew on. This fast-paced farce cleverly combines entertainment and education while using comedic satire at its highest level.”

When asked why he chose to repeat the show for the 2022/23 season, Minning continued, ”The Learned Ladies production we took to the Edinburgh Fringe Festival, as part of the highly competitive American High School Theatre Festival, surprised all of us with how well it was received by the international audiences. It was clear that our students had found something they loved to perform and it translated beautifully beyond the walls of Menlo. And if it ‘played’ so well to many ‘across-the-pond’, I thought it would be just the right dose of frolic and fun to be part of our 22/23 drama season.”

Dr. Charles Hanson, a beloved history teacher at Menlo for 24 years makes a cameo appearance in the role of Vadius. Hanson had similar thoughts: “After hundreds of years, Molière is still laugh-out-loud funny. So you know he was onto something fundamental and hopelessly enduring about human nature. If you come see The Learned Ladies you’ll find out what that was!”

Continuing the tradition of philanthropy, the Menlo Drama Department strives to ‘Give Back’ both on and off stage. Menlo Drama has raised more than $58,000 for nonprofit organizations, each chosen by the cast because its work resonates with a theme in the show. Menlo School’s production of The Learned Ladies, will support Community Reading Buddies, a non profit organization working to close the early literacy gap in the Bay Area.

Tickets are $12 for adults, and $6 for students, available for advance purchase online.  Tickets are also available at the box office one hour before each performance.