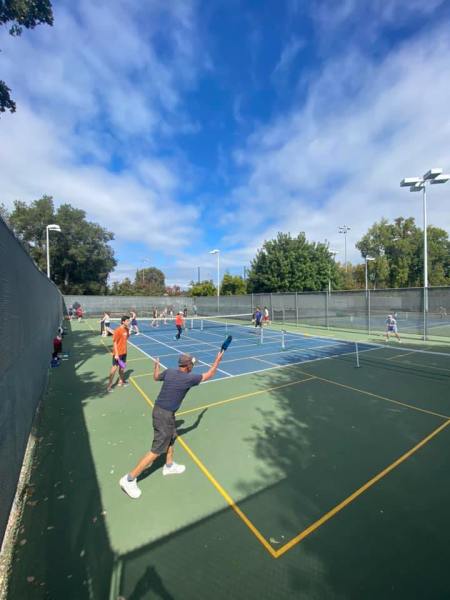 Menlo Park resident Jim Schott gave us a heads up about the Menlo Park Mid-Winter Pickleball Challenge on Saturday morning, January 28. He emails:

“The Menlo Park Mid-Winter Pickleball Challenge is set up as an informal round-robin tournament. The event is open to the public (signup in advance [jim@schottmail.com] or Saturday walk-ons if space is available).

“Nealon Park’s tennis court 5, set up with four pickleball courts: Court 1& 2 for beginners, Court 3 intermediates, & Court 4 for advanced players. Players will be matched by skill level and games will be played with no more than three consecutive games. The event will finish with play-offs for the “winners”.

Continues Jim: “The MP clubs play on Nealon Park’s tennis court #5. The play area is lined for both tennis and for four pickleball courts and portable nets are set up on the court and (two PB courts on each side of the tennis net). It can get crowded!

“When there are more than 16 players, the others coordinate with a “waitlist” to join the next game (the waitlist is managed with “paddle-rack” that allows up to 12 players to wait their turn). Play is limited to Tennis Court #5 but if there are any players on the four adjacent tennis courts, they often watch with envy at all the fun that happens with the Pickleball games!”