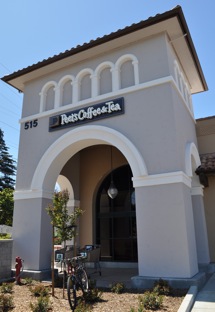 An imposing façade for the new Peet's

A sign in the Peet’s Coffee emporium on Santa Cruz at University promises that the new Peet’s, in the recently-expanded shopping center at Middle and El Camino, will not replace that quintessential Menlo Park hangout.

Speculation has it that Peet’s is using the recession to expand, and, in particular, to deny the space to strapped competitor Starbucks, which already has a store on Santa Cruz, two blocks away from Peet’s Menlo stronghold. Indeed, Starbucks is demanding 25% lease reductions from its landlords, according to one source. We sure hope the WiFi works better in the new place…